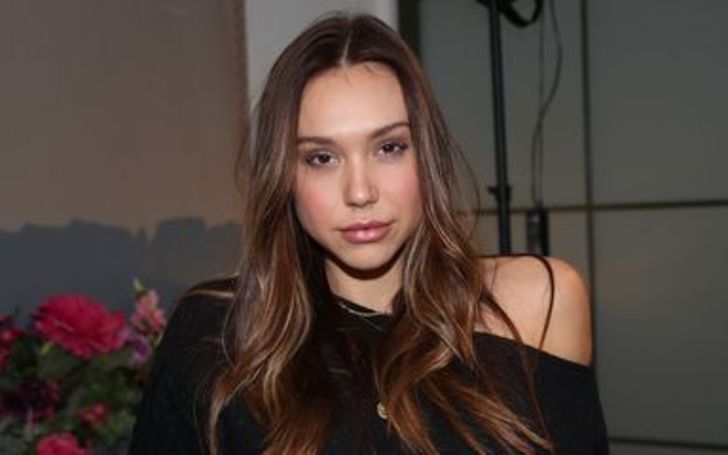 Here are all the details related to the relationship status and dating history of the American Internet Celebrity Alexis Ren.

Alexis René Glabach is a famous American Internet celebrity and model and is well recognized publicly from her professional name Alexis Ren. Alexis Ren was born on November 23, 1996, in Santa Monica, California, United States. She grew up in Santa Monica with her two sisters and a younger brother. She did not attend a regular school and was homeschooled during her childhood.

Alexis Ren got discovered to be a model at the age of 13 for the label Brandy Melville. She rose to popularity in the social media when photos of her in a black string bikini posing by the pool went viral on Tumblr. She then appeared in a series of advertisements for the mobile game 'Final Fantasy XV: A New Empire.' Alexis afterward went on to launch an activewear line called Ren Active, and she was named a Sports Illustrated Swimsuit 2018 Rookie of the year.

On September 12, 2018, Ren got an opportunity to compete in the American dance competition series 'Dancing with the Stars' with the dance partner Alan Bersten. The pair reached the finals and came in fourth place on November 19, 2018. In October 2019, she starred as "Scarlet Jones" in the music video 'South of the Border' by Ed Sheeran.

You might be curious to know about the current and past boyfriends of the social media influencer and model. Here in this article, we present to you the complete information on the relationship status and dating history of Alexis Ren.

Who is Alexis Ren's Boyfriend?

Alexis Ren is currently in a relationship with her boyfriend, Noah Centineo. Noah Centineo is an actor and played in the television series 'The Fosters,' the Disney channel film 'How to Build a Better Boy,' and Netflix romantic comedy films 'To All the Boys I've Loved Before' and 'Sierra Burgess Is a Loser.'

Alexis and Noah met through a mutual friend and are in a relationship since January 2019. Alexis seems to be really into Noah as she told in an interview with Entertainment Tonight that 'I love that man. He's amazing.' When asked about what she loves about him, she answered:

His spirit. He's so vibrant and so passionate about everything he does. He puts the 100% of himself into everything. And his heart is gold.

Alexis and Noah are already in a relationship together for over a year now.

Check out: Scott Conant is Married to Wife Meltem Conant Since 2007 - Details of their Relationship

Alexis Ren, who's pretty renowned for her 10 minute ab workout, was involved in relationships with some prominent guys in the modeling and entertainment industry. Some of the past boyfriends of Alexis Ren are listed below.

Alexis Ren and her 'Dancing with the Stars' partner Alan Bersten dated for a while.
Source: Us Weekly Magazine

The partnership of Alexis and Alan clicked instantly the moment they met. They performed brilliantly in the competition, and their well-formed collaboration took them to the Finals of the show. The couple succeeded in obtaining the fourth position in the season. They, however, split up shortly after the end of that season's 'Dancing with the Stars.'

The multimillionaire Alexis Ren and Jay Alvarez dated from 2015 to 2017. Ren and Alvarez were similar in many ways, and the most important of all, both of them were models. People thought the relationship was a bit more special than any of the other relations Alexis Ren was involved in.

But Alexis and Jay got to a bitter breakup, and they started piling up blames on each other in their social media profiles.

Sky Bear was another man involved in love with the beautiful model Alexis Ren. Alexis, however, kept her relationship with Sky, who runs a fitness company, private. Sky Bear is not his actual real name; it is just the name he uses in his Instagram account.

One of Alexis Ren's past boyfriends was a guy who goes by the Instagram name Sky Bear.
Source: Sky Bear Instagram

Sky shared a picture of Ren on his Instagram with a long poem dedicated to her to showcase his love for the model. A little excerpt of the poem he wrote in the post is given below.

But they did not last long, and rumors started growing that Ren started dating her 'Dancing with the Stars' dance partner Alan Bersten. There is no available information regarding when they broke up.

To learn about the relationships of famous people, visit Idol Persona.