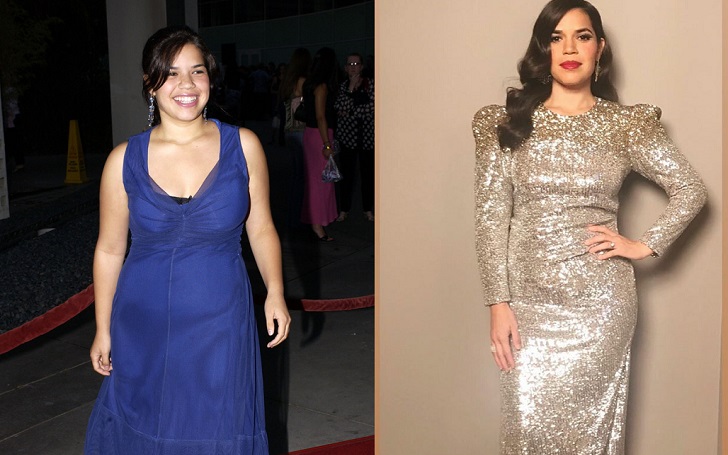 When it comes to body positivity and learning to love the curves, America Ferrera is certainly a very good example of a poster woman. Her childhood was not an ideal type to be entering the entertainment industry as her brother even rolled his eyes when she said she wanted to be an actress in the early 2000s.

But with perseverance, she proved the doubters wrong as it was a revolution in her era to not have to always be blond and skinny to be a diva. And then, she became the newest spokesperson for curvy figures in Hollywood.

Before her significant role in 2005, with Blake Lively.
Photo Credit: Rick McGinnis

Still, there've been many moments the 'Superstore' star felt body-negative. As for weight loss, it just happened with the obvious benefit coming from the love of workouts and being a little more outdoorsy because she felt more confident when involved in these activities.

2007: America Ferrera Was Still Figuring Out If Weight Loss Was a Path to Take

America Ferrera's earliest interviews related to her body was with Glamour in late 2007. She'd finally gotten her breakthrough and an Emmy nomination for when Salma Hayek convinced her to take on the role of 'Betty Suarez' in 'Ugly Betty' in 2006, and there already were a lot of examples of non-predictable body type women involved in the industry making a name for themselves.

When the braces and the glasses came off, she was Beauty Betty, but she loved her character on TV.
Photo Source: Pinterest

She acknowledged the kind of revolution was happening all over television and felt like she was a "regular - size person—I'm a size 6 or 8, which is totally normal." But as a normal person, she had her body insecurities. But rather than gaining weight, weight loss was something she was afraid of and confused as to whether to go through. Because some people might wonder why she was not comfortable with her real self.

Suggested: How Michael McIntyre Inspired Himself to Undergo Weight Loss

"Sometimes I worry more about losing weight than gaining weight, because this is how people know and accept me," Ferrera, then 23, told Glamour. "I do feel like if I wanted to get in better shape, there might be a backlash of, Why isn't she comfortable with herself anymore? So I try to figure out what my own goals are."

She later revealed she went for therapy after the Emmy win.
Photo Source: Instagram

The actress also shared how she ate her way through her freshman year of college. It was "the most awkward stage I went through." And she still had insecurities over her legs. "I never liked my legs and I can't remember the last time I wore a bathing suit in public," she said at the time.

And an easter egg: She was enlisted as one of TIME Magazine's most influential people in the world in 2007.

2012: Finding It Hard to Accept Compliments for Her Figure

During her entire career, the time Ferrera, who enjoys a net worth of $16 million, appeared in her lowest size was around 2012/13. And she was still inspiring young women to focus on their passion rather than what size of clothes they might need to wear for any occasion. But there still was this difficulty of acceptance — when fans compliment her look, it was hard for her to take a positive note on that.

The Honduran bombshell was featured on the cover of 'Cosmopolitan for Latinas' Fall/Winter 2012 issue, and she admitted to still feeling insecure but that it took a lot to get over it.

There was nothing a magazine cover could fix.
Photo Source: Cosmopolitan

"More often than not, I hate photos shoots and I hate being on the red carpet. I don't think I'm very well equipped for the scrutiny or the pressure to be perfect, and I don't think anyone really is," she said in her cover interview. "People are saying 'We love you and love what you do,' and you're sitting there thinking, 'I'm not skinny enough or pretty enough.' It's taken a lot of work to get over that."

Still, she wants to be an inspiration. "How much time have I wasted on diets and what I look like? Take your time and your talent and figure out what you have to contribute to this world and get over what the hell your butt looks like in those jeans!"

2016: The Triathlon Really Helped Change the Voices in Her Head, & Weight Loss Was Just a Reward

The most significant part of her journey to self-acceptance and realizing her inner strength was in 2016 when she decided to run her first triathlon: swimming a mile in the ocean, then biking 25 miles before finishing the final 6.2 miles with a run. And it wasn't a decision she really felt worth it at the beginning.

She was a winner after her first triathlon.
Photo Credit: Christy Haubegger

America Ferrera, who is married to her husband Ryan Piers Williams, wrote a column for the New York Times in November 2016 after successfully and gracefully completing her first triathlon. She then begins to depict her struggle with body positivity for years. When she stood to accept the Emmy in 2007, a voice in her head was questioning her credibility for the award.

Who do you think you are? You don't belong here. No one here thinks you deserve this. Hurry up and get off the stage.

That same scary voice lingered on inside her head for the next eight years as she took up therapy to challenge that negativity. Then in 2015, she saw a friend of hers train hard for the next triathlon after already completing one for the Leukemia & Lymphoma Society. "As I watched her train, I was equal parts enthralled and horrified."

Another Journey: Kathy Bates Inspired Herself for Weight Loss after Learning of Lymphedema

Ferrera's longtime boyfriend-turned-husband, Ryan Piers Williams, is a really outdoorsy person and himself decided to run for the triathlon in 2016 with the friend. Learning of the decision, the voice returned back in her head.

Don't even think about it, America! You're the fat kid. The procrastinator. The quitter. You have cellulite. YOU ARE NOT A TRIATHLETE!

But she was up for it; she made the decision to go for it and thus started training. As she details in her article, the first few weeks, the voice kept bringing her down every lap she ran and even her coach Jerome heard those voices. She was shocked that he knew what she was thinking.

And then, the husband-wife participated in their second triathlon in 2017.
Photo Source: America Ferrera, Instagram

However, one day, she decided to change the words her inner voice spoke. From Destiny's Child ft. Beyoncé's 'Survivor', she started to chant everything in contrast to that mean voice.

Along the way, she came to the realization that the voice "only wanted to save me from humiliation and failure. She was protecting me the best way she knew how, and I learned to appreciate that, even if I no longer required her services."

Check Out: The Intense Exercise Simon Pegg Did for a Little Over-the-Top Weight Loss

As she loved the exercise, she completed the triathlon with such enthusiasm but didn't immediately cry out. Only two days later, she realized the feat she'd actually achieved with the triathlon, not eradicating the critical voice inside but transforming it.

2018: Rejuvenating the Inner Strength After Sitting Out from Training for Her Pregnancy

America had a newfound love for training & exercise since then and ran for a second triathlon in 2017. Consequently, she'd lost a visible amount of weight in the time since her training. There were reports of a 30-pound weight loss, but unconfirmed.

However, on New Year's Eve 2017, she had a big announcement to make, the family of two was about to become a family of three in 2018. With this, it was sure that her training had stopped. She had to give the body to her growing child, who they welcomed to the world in late May 2018.

But before that, she'd appeared on the launch of 'Move Mountains' when 'The North Face' teamed up with 'Girl Scouts of the USA'. As an adventurer herself, it was a sensible choice for her to encourage other women to be the same. She again shared how the triathlon actually changed her body perspective.

And yeah, the whole endeavor was absolutely not for weight loss. It was for self-confidence. "I didn't do the training to change my body or to lose weight, but afterward, I felt different about my body," she told Shape. "I gained a huge amount of gratitude for my health and what my body does for me. I put it through a lot, but the more I took care of it and appreciated it and kept showing up for my body, it kept showing up for me for every single challenge."

Did Brooks Koepka Lose Weight Only for 'The Body Issue 2019'?

When Sebastian Piers Williams was born, it was not the post-pregnancy weight that was troubling her, it was the fear of losing her inner strength again. She was missing her body's ability to change that voice in her head. And getting back to exercise was a gradual process too.

In a cover interview for Health's December 2018 issue, the 36-year-old discussed how she felt about her body after months of giving birth. "There are parts of it that I love and also parts of it that are super challenging," she told the publication. "I'm just now starting to feel like I want to feel strong in my body again. I didn't work out as much as I imagined I would during my pregnancy. I was in triathlon shape when I got pregnant. I had so much on my plate and something had to give."

She's since continued to exercise her way into loving herself. But these days, she's busy with her second pregnancy. She did continue exercising for as long as she could during this moment. As of this current moment, she's not in the state of doing it anymore. Oh, and she also appeared on 'The Kelly Clarkson Show', to share about her journey to body positivity with Kelly Clarkson, who has her own weight loss story to tell.

She's celebrating her pregnancy right now and her birthday as well. The second pregnancy was also announced around New Year as well. Coincidence much?