Home / net-worth / Who is Alexandra Daddario's Husband Andrew Form? What is his Net Worth?

Who is Alexandra Daddario's Husband Andrew Form? What is his Net Worth? 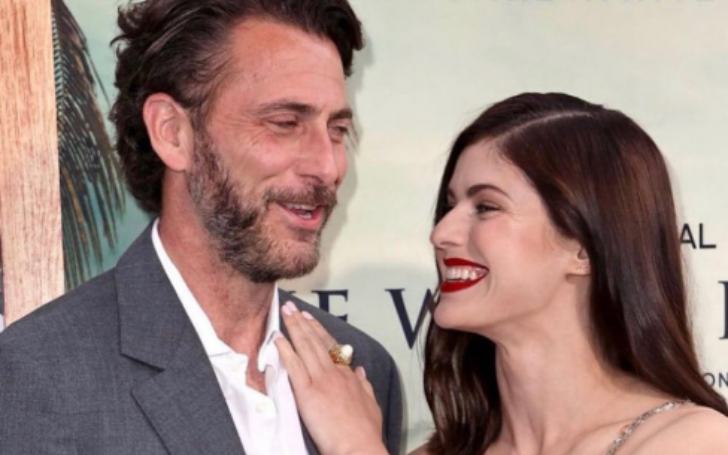 Grab All The Details On Alexandra Daddario's Husband Andrew Form Net Worth!!

Alexandra Daddario's husband, Andrew Form, 53, is a film producer from the United States. Form is best recognized for his work on Friday the 13th, Teenage Mutant Ninja Turtles, and The Purge.

Talking about Form's private life, he was previously married to his wife, Jordana Brewster. On December 2, 2021, Andrew announced his engagement to Alexandra Daddario. The lovebirds tied the knot in June 2022.

What Is Alexandra Daddario's Husband Andrew Form's Net Worth?

As per MNS, Andrew Form is a millionaire, and his estimated net worth is around $30 million. Form has made a fortune for himself by producing the best films in Hollywood, most of which have been commercially successful.

Andrew Form is a millionaire, and his estimated net worth is around $30 million.
Photo Source: Instagram

Jordana Brewster and Andrew Form spent $4.6 million for a 1-acre lot in Los Angeles in 2014. They then demolished the previous home on the property and custom-built a 5,600-square-foot grand mansion. This house is now valued at least $10 million.

They sold their former home for $3.8 million shortly before purchasing this new one. They paid $3.4 million for the house in 2011. Form spent $7.3 million for a property in LA's Hancock Park district in September 2021.

Andrew Form began his career in low-level occupations before moving into the film as a personal assistant to producers Jerry Bruckheimer and Don Simpson. His first credited effort as a producer came in 1995, with the short documentary The Making of Crimson Tide.

Andrew Form began his career in low-level occupations before moving into the film as a personal assistant to producers Jerry Bruckheimer and Don Simpson.
Photo Source: Instagram

Form continues to work as an assistant to learn more about the field before becoming a full-time producer. Over the next few years, Andrew produced films such as Trading Favors, Kissing a Fool, and The Shrink Is In.

In 2003, Andrew had his breakthrough and a tremendous smash with the release of The Texas Chainsaw Massacre, which he executive produced. The horror film starred Jessica Biel, Jonathan Tucker, and Andrew Bryniarski and was a box office success. Following this, Form resolved to devote himself entirely to movies.

Form was the producer of numerous big international hits over the next few years, including The Hitcher, The Unborn, Horsemen, Friday the 13th, and A Nightmare on Elm Street.

For the first several years of the new decade, Andrew continued his experiment with movies. Before acquiring the rights to Teenage Mutant Ninja Turtles, he produced films such as The Purge, The Occult, and The Purge: Anarchy. The films were directed by Jonathan Liebesman and starred Megan Fox, Will Arnett, and William Fichtner.

Form's love of horror and thriller films aided him in selecting similar films for his project. In the following years, he released Ouija and Project Almanac.

Click Here To See: What does Zelda Williams do for a living? Details on her Net Worth

At the same time, Andrew became the producer of the adventure drama series Black Sails. Jessica Parker Kennedy, Toby Stephens, and Hannah New starred in the show. From 2014 to 2017, he produced 38 episodes.

Form also produced the Steven Kane and Hank Steinberg sci-fi drama The Last Ship in 2014. Leading actors in the series were Eric Dane, Adam Baldwin, and Charles Parnell. From 2014 to 2018, Andrew created 55 episodes across five seasons.

In 2016, Andrew decided to take it a step further and became the executive producer of the reality TV series Billion Dollar Wreck, for which he was responsible for nine episodes. In the same year, he was the producer of the hit films Teenage Mutant Ninja Turtles: Out of the Shadows, Ouija: Origin of Evil, and The Purge: Election Year.'

In 2017, Form was the executive producer of the three-episode mini-series Horror at the Cecil Hotel. Andrew had the biggest hit of his career in 2018 when he became the producer of the film A Quiet Place. The film, which included huge personalities like Emily Blunt, John Krasinski, and Millicent Simmonds, won numerous accolades and was hailed an international success.

Andrew was also involved in the horror sci-fi film The First Purge, which was released the same year. He started as executive producer of the horror drama The Purge and the action thriller Tom Clancy's Jack Ryan near the end of 2018. Both programs were well-liked by audiences. He also worked on A Quiet Place 2 and The Forever Purge.