Home / health / How Did the World's Fattest Kid Lose Weight? Here's What You Should Know About Arya Permana's Incredible Weight Loss

How Did the World's Fattest Kid Lose Weight? Here's What You Should Know About Arya Permana's Incredible Weight Loss 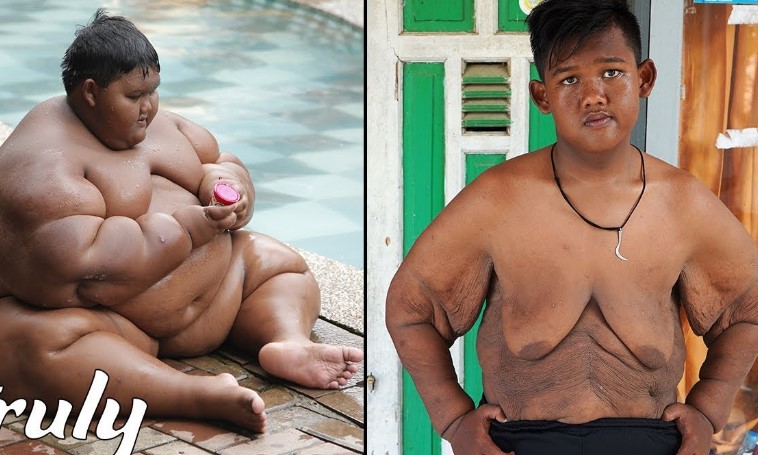 Here's what you should know about Arya Permana's weight loss.

We hope you know about the child who was dubbed 'The Fattest Kid,' of course, you know, that's why you are here in the first place. We are really sorry for asking you such dumb questions. Anyway, since you are here, here's a few things you should know about the kid, who underwent a massive weight loss transformation, and now, is not the 'Fattest Kid' anymore.

So, the kid we are talking about is Arya Permana, an Indonesian kid, who was dubbed the World's heaviest living child, weighed 423 pounds (192 kgs), and considered morbidly obese.

So, according to the reports, the kid was born at a healthy weight in 2006, but within two years, But he started to gain weight in 2014 and increased rapidly in 2016. Following his sudden weight gain, the kid was put on a rapid diet plan to check his body weight, which actually helped a little and allowed the kid to return to school and normal life.

Here's a little background about the kid that led him to gain weight excessively. According to the reports, the child, who was dubbed World's 'Fattest Living Kid,' his diet used to consist of instant noodles, fizzy drinks, and deep-fried chicken, Everyday!

Arya used to eat five meals a dayArya used to eat five meals a day, with two large plates per sitting. His parents tried to encourage him to eat healthier but admitted they gave in to Arya's demands for fattening food. All thanks to his total junk diets, at just ten years old, the kid lost the ability to walk, was forced to bathe in an outdoor pond, and was homeschooled.

As his weight became life-threatening, Arya had had to undergo a gastric-sleeve operation. The kid became the youngest person to go through such a procedure. The surgery helped him lose more than 234 pounds (106 kgs) and now weighs a little over 180 pounds.

Following his surgery, Arya is on a strict diet. The bariatric surgery, at the Omni Hospital in Jakarta, alone helped him lose nearly 70 pounds and since the weight continued to drop.

At first, Arya was not happy with his diet and new lifestyle following the surgery and continued eating junk foods, but only to throw up later. Since the procedure, just seven spoons of food is enough to fill him up.

Arya now lives on a healthy diet. His daily meal consists of grilled fish, vegetables, soup, and fruit. All thanks to the surgery, he can now play, walk to school; his attitude looks calm and more cheerful.

You May Also Like: EastEnders Star Jessie Wallace Shrank From Size 14 to 6 Following Massive Weight Loss, Find Out How She Did It