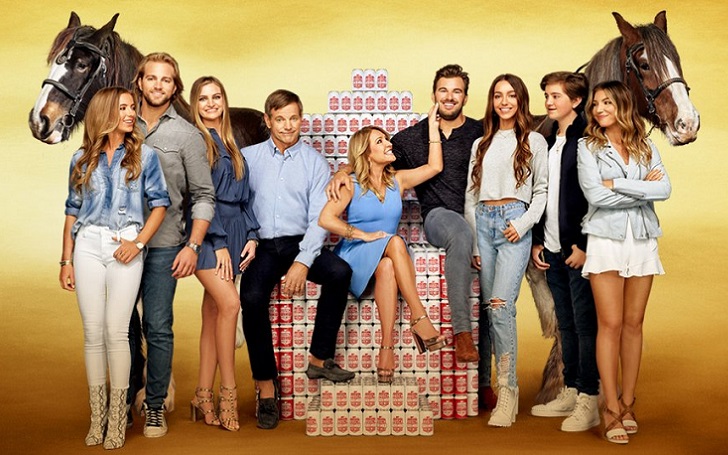 While everyone identifies the Busch family as one of the richest in America, they are ready to demonstrate their daily chores on a brand new show, 'The Busch Family Brewed' premiering on March 5, 2020. Here all the details about them.

Kudos to the MTV network; we are going to get a sneak peek into the lives of the wealthiest, 'The Busch Family', in a 10-episode comedic show. With a reality docu-series prepared, the series revolves around the original characters from the billion-worthy brewery family.

While the state of St.Louis loves the Anheuser-Busch beers, many are curious about the lifestyle of Billy Busch Sr., the great-grandson of A-B co-founder, Adolphus Busch. He is joined by his wife, Christi Busch, and fellow Busch children.

The Busch Family Brewed Set to Premier on March 5

MTV could have found a cash cow, having 'The Busch Family Brewed,' the series on the real lives of the billion worthy family. Set your alarm clocks, 'cause the Busch family will air on the network on 9 PM, March 5, 2020.

'The Busch Family Brewed' will cover the realities of the billionaire Busch family.
Source: Instagram

It's not the first time MTV took a gamble with a family reality sitcom since it launched one of the biggest hit, 'The Osbournes', a series on the domestic life of the metal singer, Ozzy Osbourne.and his family. The three-seasoned show was one of the network's biggest hit with the attribute of the most-viewed show.

The Plot Revolves Around The Realities of The Family

The brand new 'The Busch Family Brewed' is an insider look into the wealthiest families of America. The history of the brewery family goes way back to 150 years, but not everyone knows how the business tycoons live in real life.

You may also like: The facts about Drew Barrymore's weight loss!

While many remain skeptical about whether the plot will involve the actual realities of the family. Since the new generation of the Busch kids, adults now, with the responsibilities on their shoulders to carry on the family legacy with the business, the show aims to cover the break-ups and considerable changes in their lives.

The MTV show will cover all the ups and downs of the Busch family members on the screen. Furthermore, it promises to incorporate good looks, serious athleticism, and the family's attempt to navigate 'recent approval to break ground on a new craft brewery on their property.'

Also See: The complete breakdown of Noah Centineo's net worth.

Not just that, the show reflects the enormous net worth, including their 700-acreestate.

All The Busch's Will Feature As the Cast

The oldest Busch family member, as of now, Billy Busch is set to lead the show alongside his wife, Christi Busch, as they indicated in the trailer itself.

The exclusive trailer of the show came back on February 6, 2020, which gave a peek on how the ten-episode long show is going to be like, It incorporated humor, lifestyle, the chores and the crazy side of the fam.

Watch: The Official Trailer of MTV's The Busch Family Brewed

Besides the married couple, the show will incorporate the likes of their children, including Billy Jr. Busch, Haley Busch, Abbey Busch, and Maddie Busch. Furthermore, it also includes Gussie Busch, Grace Busch, and Peter Busch.

The trailer also saw Gussie, the ladies man with a top-less scene, pouring beer down his chest and showing signs of things to come. Billy Jr. is considered as the responsible one, while Haley is the sweeter one. Similarly, Abbey is the wild one; Grace is the blunt one, and Peter is the baby.

Christi Busch and Billy Busch Sr. open the trailer of their show on MTV.
Source: Flipboard

Only time will tell if the much-anticipated show will be as per the expectations. Still, looking at the promos and hype, the fans couldn't be more excited to delve about the realities of the billion-earnings brewery family.

Stay with us to find out more about your favorite stars at the one and only, Idol Persona.