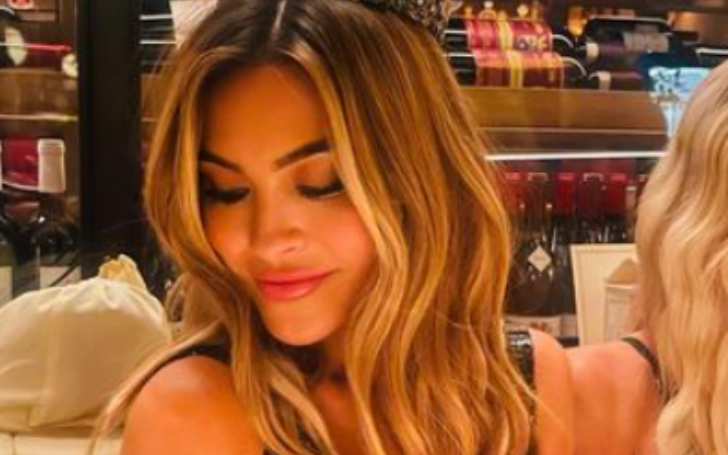 As per Pop Culture, Fans spotted the star of Selling Sunset, Chrishell Stause, flaunting a diamond band on her ring finger, which led to speculation that she and her partner G Flip were engaged.

Fans spotted the star of Selling Sunset, Chrishell Stause, flaunting a diamond band on her ring finger, which led to speculation that she and her partner G Flip were engaged.
Photo Source: Instagram

The former actress, now a real estate agent, was out with pals in Los Angeles on Saturday night celebrating her forthcoming 41st birthday when she donned the diamond sparkler.

Stause's representative was obliged to issue a statement to Us Weekly on Monday to dispel the rumors as social media flew into a frenzy.

The official informed the publication that "they are actually not engaged" and added, "It is just a ring and nothing else."

On Saturday, Stause had a surprise birthday supper at Catch Steak in West Hollywood, where she flaunted what appeared to be an engagement ring.

Jason Oppenheim, her supervisor and ex-boyfriend, organized the occasion. The five-month relationship between Stause, who turns 41 on Thursday, and the 45-year-old CEO of the Oppenheim Group was peacefully ended in December.

She had assumed she was accompanying her co-star Emma Hernan to the recently launched Melrose Place hotspot when she noticed Nightly Pop co-host Nina Parker and realized her fellow cast members were also present.

You May Also Like: Anya Taylor-Joy Reportedly Married her Boyfriend in Secret!

Chrishell posted a series of pictures from the celebration on Instagram along with the caption, "I have the finest friends... THE BEST early birthday surprise."

"I love each of you so much! I had a great time. My very first surprise birthday celebration! The best pals a girl could have, I'm so grateful in my heart," she continued.

Stause's new love interest, G Flip, who wrote on her Instagram post, "Happy early birthday, sweetie," was not present at the wild party.

Since the non-binary singer, 27, was chosen to play the vixen in their music video for Get Me Outta Here, which was released on May 12, Stause has been having a hot and heavy relationship with her.

In preparation for their "biggest gig" at the Splendour in the Grass Festival in Byron Bay, which runs from July 22 to 24, G Flip, whose real name is Georgia Flipo, is presently in their native Australia practicing the drums with a fractured hand.

In the most recent season of the Netflix sensation Selling Sunset, Stause and Jason were dating but broke up because of his opposition to having kids.

For three months in 2020 and 2021, Stause dated Dancing with the Stars professional dancer Keo Motsepe.

Her divorce from actor and This Is Us star Justin Hartley, who was her ex-husband, was finalized in February 2021.

G Flip expressed how "proud" they were of Stause during an interview on the Australian news program The Project earlier this month.

When I came out, it happened over [spaghetti bolognese] with my father; when Chrishell did it, it happened in front of everyone on one of the popular TV shows.