Home / lifestyle / Who is Chrishell Stause's Husband? Details of Her Married Life!

Who is Chrishell Stause's Husband? Details of Her Married Life!

Grab all the details on the married life and husband of the American actress Chrishell Stause.

The American wealthy actress Chrishell Stause is well known for her part in the Netflix reality show called 'Selling Sunset.' As an actress, she played the previous television roles of 'Amanda Dillon' on 'All My Children' and 'Jordan Ridgeway' on 'Days of Our Lives.'

Besides her role in television programs, Stause draws many of her fans of 'Selling Sunset' to learn about her personal life. Many of them are interested in her married life and relationship status, so we compiled some details below on such topics.

Who is Chrishell Stause's Husband?

Chrishell Stause just recently got divorced from her ex-husband and 'This Is Us' star, Justin Hartley. The couple was in a relationship together for six years before separating. Hartley is also known for his roles in soap operas like 'Passions,' 'Smallville,' and 'The Young and the Restless.' For 'This Is Us,' he's been nominated for the Critics' Choice Television Award for Best Supporting Actor in a Drama Series.

Chrishell Stause recently divorced her ex-husband and 'This Is Us' star, Justin Hartley.
Source: Daily Mail

Justina and Chrishell were dating for four years before they got married in October 2017. The ex-couple had got engaged two years before they tied the knot in July 2015. Justin was previously married to his 'Passions' co-star Lindsay Korman from 2004 to 2012. Stause was also formerly engaged to Matthew Morrison from December 9, 2006, to 2007.

Also, See: Has There Ever Been a Picture of Hannah Ferrier's Boyfriend Out in Public?

The couple was only married for two years when Justin filed for divorce in November 2019. He cited 'irreconcilable differences' and said that they had separated on July 8. An article by USA Today reported that the actress Chrishell Stause learned of the divorce filing from a text by Justin.

Chrishell Stause was in disbelief at how Justin Hartley ended things between them. 'We had a fight that morning over the phone, and I never saw him since,' she said. 'We didn't talk things through, and before we had a chance to figure anything out, he filed ... In a fight, like that's his go-to. Like, 'I'm out, I'm out.' I hate that kind of impulsive stuff, but I always just thought that's just an issue (but) we'll work through it.'

Chrishell Stause was deeply hurt by how Justin Hartley ended things between them.
Source: Fox News

The fit and healthy actress was deeply hurt by how Justin separated from her. 'Your feelings obviously changed for me at some point, but I just feel like that's how you would treat the garbage that you throw out,' Chrishell said. 'It's hard not to feel worthless in this moment in this moment. It's hard not to feel like everyone's laughing at you.'

Stause also dated Jason Oppenheim. However, the couple broke up.

Who Is Chrishell Stause Dating In 2022?

Chrishell is currently dating G Flip. She is an Australian musician.
On the PEOPLE Everyday Podcast, G Flip said that she met Stause on Halloween in 2021 and discovered they had a lot in common.

Stause talked up about her relationship with G Flip in an Instagram video in the hopes of better understanding gender identity among fans. 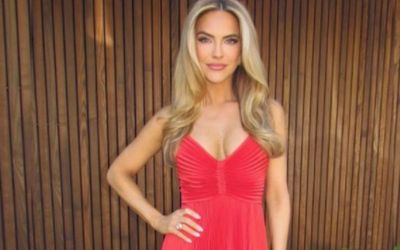