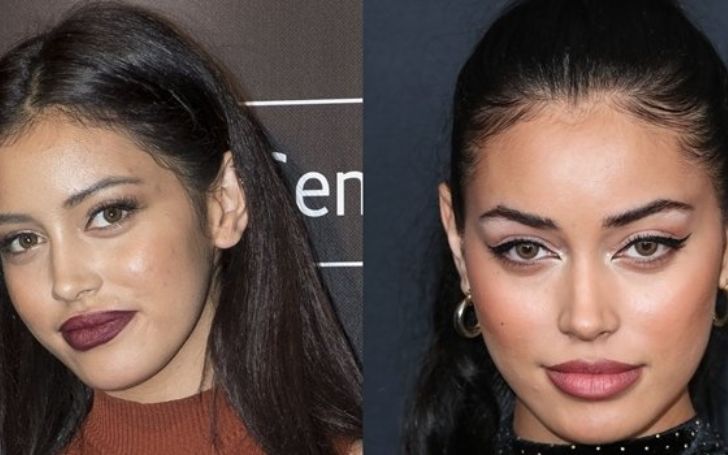 Grab All The Details On Cindy Kimberly's Plastic Surgery!!

Cindy Kimberly is a well-known Dutch social media personality, model, and Instagram star who was born in Amsterdam on November 16, 1998. Her zodiac sign is Scorpio. 5'7'' tall model rose to prominence after Justin Beiber uploaded a photo of her on his Instagram with the message "OMG who is this!!"

Kimberly became a model, and in 2018, she appeared on the cover of GQ Spain. The 23-year-old star had a long-term romantic relationship with her boyfriend Neels Visser. She was photographed with British racing driver Lewis Hamilton in 2019.

Some people believe that Cindy's nose and lips have changed in the pictures before and after her fame. It has not been officially proven, but there are rumors that she has had plastic surgery.

Most people who have known Cindy Kimberly for a long time will notice a change in her appearance. Most individuals feel that the alterations are due to plastic, particularly a nose surgery. After being assailed by various rumors, Cindy took to Twitter to clarify the situation. She wrote:

Cindy Kimberly is a well-known Dutch social media personality, model, and Instagram star who was born in Amsterdam on November 16, 1998.
Photo Source: Instagram

"It's honestly very upsetting how many times I have to convince people I haven't had a nose job when I'm very open about how my body is photoshopped." I've had my lips injected and my lenses replaced. "I'm not hiding anything."

Kimberly clearly got a lip injection to make it look sexier, based on her statement. And we can say that worked fairly well because Justin was drawn to her after meeting her online. Justin Bieber couldn't help but share Cindy's image on Instagram.

Cindy Kimberly Has Had Rhinoplasty?

Cindy Kimberly first gained public recognition after Justin Bieber posted a photo of her on his Instagram. Although she was very attractive at the time, she was not the stunning woman she is now. When comparing the preceding photo to the most recent photo, it appears that she has undergone a nose job.

Cindy Kimberly first gained public recognition after Justin Bieber posted a photo of her on his Instagram.
Photo Source: Instagram

Though Kimberly hasn't confirmed having a nose operation, traces of rhinoplasty may be seen on her nose. Before and after photographs show the extreme thinness of her dorsum and the indentation in her LR cartilages where the physicians shaved it down.

All of this is standard with any nose job. Another difference we can see on Cindy's nose is that it has become thinner throughout the years.

As per Article Mix, Cindy Kimberly's upper and lower lips, like her nose, have changed throughout time. When comparing before and after images, we can clearly perceive the difference between a regular lip and a larger lip.

The philtrum area is also plainly visible, which is full and filled up. Kimberly has already admitted to using lip injections and fillers to her fans.

Cindy Kimberly Is A Fashion Model

Cindy Kimberly is a fashion model; prior to entering the modeling industry, she worked as a babysitter. She began modeling after some time.

Cindy Kimberly is a fashion model; prior to entering the modeling industry, she worked as a babysitter.
Photo Source: Instagram

Kimberly has also participated in several modeling competitions. She was given the opportunity to appear on the cover of GQ magazine in 2016.

Cindy has since modeled for numerous well-known modeling agencies and fashion companies. She is now a well-known model. Aside from that, she signed modeling contracts with several well-known agencies, including Untitled Management, Uno Models, and The Lions.

Cindy is not only a model but also a YouTuber and vlogger. She launched her self-titled YouTube channel in 2017. Her Youtube channel currently has over 568K followers. Kimberly mainly uploads vlogging and makeup-related videos to her account. Kimberly has over 7 million followers on her Instagram account.

Tune in to Idol Persona for more stories on your favorite celebs.