Home / lifestyle / Who is Cree Cicchino's Boyfriend in 2020? Find Out About Her Relationship

Who is Cree Cicchino's Boyfriend in 2020? Find Out About Her Relationship

Learn about the relationship status and boyfriend of the emerging young actress Cree Cicchino.

Cree Cicchino is best recognized for her role of 'Babe Carano' on the Nickelodeon comedy television series 'Game Shakers,' in which she starred from 2014 to 2019. Additionally, she also starred as 'Seashell' on the TV series 'Whiskey Haven Tales with the Palace Pets.'

Cree Cicchino's other starring role comes from her portrayal of 'Marisol Fuentes' on the series 'Mr. Iglesias' in 2019. She has also made appearances in other television series such as 'The After Party,' 'Henry Danger,' 'The Adventures of Kid Danger,' 'Me, Myself and I,' 'Alexis Joy VIP Access,' 'Piper's Picks TV,' and 'Paradise Run.' She enjoys a net worth of $500 thousand. Apart from her acting career, people also seem to be eager to learn about her relationship status. Therefore, we compiled some details of her love life below.

Who is Cree Cicchino's Boyfriend in 2020?

Cree Cicchino is in a relationship with Jaheem Toombs. In February 2020, the couple shared a series of pictures revealing that they got engaged. According to an article by the website Just Jared Jr., Jaheem proposed Cree on Valentine's Day of 2020 in front of the castle in Disneyland. The couple took to Instagram and shared the news, with photos of the proposal, tour to Disneyland over the holidays.

Cree Cicchino is in a relationship with boyfriend Jaheem Toombs.
Source: Instagram

'But when I'm way up here, it's crystal clear…..💍 @creecicchino #shesaidyes 😉,' Jaheem wrote on his Instagram account. And Cree added: '...now I'm in a whole new world with you ✨#isaidyes💍' on her own account.

Even though the couple made their engagement public on social media, there's no information available on when Cree and Jaheem began dating and when they met for the first time. But the relationship seems to be date back prior to 2016 when the two were seen together walking the red carpet at the end of the summer celebration.

Also See: Who is Majah Hype Ex? The Caribbean Comedian Reportedly Abused his Ex-Girlfriend, Here's What You Should Know

But at the end of the day, Cree and Jaheem revealed that the engagement was a fake one, and the proposal was all a bluff. The two are not engaged, but they are still in a relationship.

Apart from her relationship with Jaheem Toombs, Cree Cicchino has been linked with a few other celebrities. There's not much information about her dating history, but one or two few rumors seem to pop up every year about her past relationship.

Cree Cicchino was rumored to be dating 'Henry Danger' actor Jace Norman when they worked together in an episode of the series.
Source: Instagram

Cree Cicchino was once rumored to be in a relationship with 'Henry Danger' star Jace Norman. They reportedly dated when their characters crossed the path in a 2017 episode of the series 'Henry Dander' and even spent Valentine's day together.

After the episode, titled 'Danger Games' of 'Henry Danger,' aired, many fans were convinced they were really in a relationship with each other. But later, Cree revealed in an interview with Celeb Secrets that she and Jace were good friends.

Check Out: Tony Hsieh Girlfriend - Find Out About His Relationship in 2020

'It was great! Jace is super talented, and we had a lot of fun,' Cree stresses on the fact that she and Jace were no more than friends. 'It's always nice to work with a good friend.' 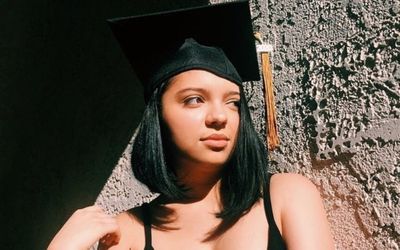 Who is Cree Cicchino's Twin Sister? Find Out About Sisters Relationship