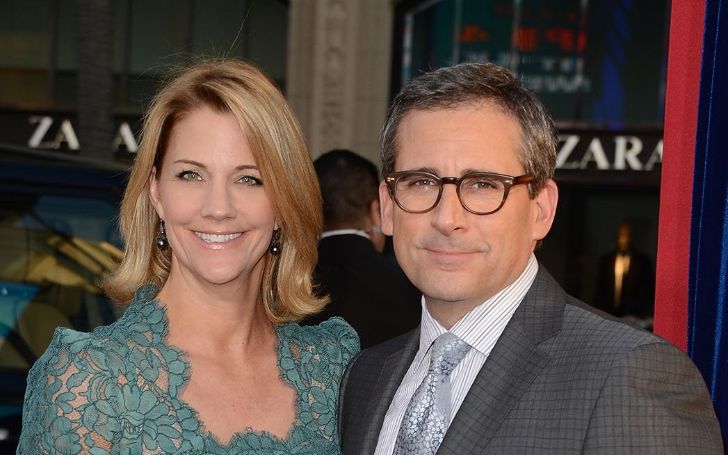 Let's learn about Nancy Carell's married life and her kids.

Nancy Carell is one of those celebrities who share equal success in both personal and professional life. She is an American actress, comedian, and writer well-known for her work on The Daily Show, The Office, and Saturday Night Live.

Talking about her personal life, she is the mother of two and is happily married to Steve Carell, an actor, comedian, writer, producer, and director. Yes, Nancy and her beau hail from the same career field, which is also expected to be the reason for their long-term married life together.

Because of her on-screen success, many want to learn about her life as a wife and mother. Thus, today's article will be all about Nancy's married life and kids.

Nancy and Her Beau, Steve First Met as a Teacher and Student

Those who want to learn how the Hollywood pair first encountered, let us tell you, it was in an improv class. You read it right. They met for the first time when Nancy Carell enrolled at an improve class at the Second City theater in Chicago, one of the most popular locations for improvisational and comedic theater in the country, as noted by News Amo Mama.

Nancy attended that class during the early 90s, and her lover, Steve Carell, was a teacher there.

Sources claim for the funnyman, Steve, it was love at first sight. However, in the beginning, he felt like Nancy hated him because she used to be very quiet around him. But it turns out to be the opposite, and even Nancy was attracted to Steve.

After Nancy's first meeting with Steve, they stayed in touch. During that time, she was working as a bartender, and Steve used to visit her.

They were shy in front of each other, which caused some delay for their relationship to grow, but after some time and courage, they ended up dating each other.

As Nancy and Steve both enjoyed each other company, they decided to tie the knot. Gradually, they walked down the aisle back in 1995. Since then, they are together, and now it's twenty-five years they have been living as a married couple, yet they still live a blissful life.

Nancy With Her Husband is Parent to Their Two Kids

It's no secret to Nancy and Steve's fans that they are blessed with two beautiful children. The fun couple first gave birth to their daughter, Elisabeth Anne Carell, in 2001. Subsequently, they welcomed their second child, a son, on June 25, 2004. The pair named their baby boy Johnny Carell.

According to the Cheat Sheet, Nancy's kids share their parents' sense of humor. Indeed, their sense of humor is so pure that many times it's hard to figure out when they're funny, as per Steve in one of his sit-downs. Keeping that in mind, we can clearly picture Carell's family having the best time in their life with one other as a perfect family.