Facts About Douglas Emhoff's Kids, Family and Past Relationships!

Learn all the details on the kids, family, and past relationships of Kamala Harris' husband, Douglas Emhoff.

Vice presidential candidate Kamala Harris is busy running campaign rallies ahead of the nearing 2020 presidential election, and her husband, Douglas Emhoff is also helping her in her run for the office of vice president.

Douglas Emhoff recently spent time campaigning for his wife in Michigan. He met the State Senator and some other local leaders there. The state of Michigan is important for Kamala's campaign, as Douglas himself said in an interview that 'we take this state very seriously.' He's also been campaigning in Colorado, where he attended a political rally held at Denver East High School. If Joe Biden becomes the next president of the United States, Douglas is going to be the first male spouse of vice president in history, as Kamala herself will be in the record books as the first female vice president of America. How much do you know about Kamala Harris' husband, Douglas Emhoff? Let's find out.

Douglas Emhoff, an entertainment lawyer, met the fellow attorney Kamala Harris in California, where he was based as a partner at DLA Piper Law Firm. The two encountered each other for the first time after PR consultant Chrisette Hudlin set Harris and Emhoff up on a blind date, according to Harpers Bazaar. They dated for a year before they decided to tie the knot.

The couple married on August 22, 2014, in Santa Barbara, California. The wedding ceremony took place at a courthouse, and Kamala's sister Maya Harris officiated the event. And Kamala, with her Indian roots, and Douglas, as a Jewish, honored each other's culture as he wore a flower garland, and she broke a glass.

As of October 2020, Kamala and Douglas hold a combined net worth of approximately $6 million.

Douglas Emhoff Has Two Children From His Previous Marriage

Kamala Harris is Douglas Emhoff's second wife. He was married to his first wife, Kerstin Emhoffnée Mackin, in 1992, and they were together for 25 years. The duo shares two children, Cole and Ella. Kamala's stepchildren lovingly call her 'Momala' and are very happy about her and their dad's relationship. Both children are college graduates; Cole studied at Colorado College, and Ella studied Fine Arts at Parsons School of Design.

Douglas Emhoff was married to his ex-wife, Kerstin, for 25 years.
Source: KapiKitab

Douglas' children have been staying away from political spotlight so far but they do support their 'Momala' in her vice-presidential campaign. The family occasionally spend time together and have a great time together. Kamala is also on good terms with Douglas' ex-wife Kerstin, and she once wrote in an article that they 'are dear friends.' She also commented about her family saying,' our modern family is almost a little too functional.' The vice-presidential candidate also went into detail to talk about what her family meant to her:

They are my endless source of love and pure joy. I am so thankful to Doug, to Kerstin, and most of all, to Ella and Cole. And as our family embarks together on this new journey—one that has taken me to South Carolina, Iowa, New Hampshire, Ohio, Nevada, and Michigan in the last few weeks alone—I can say one thing with certainty, my heart wouldn't be whole, nor my life full, without them.

Douglas and Kamala, along with their children, are truly seem to be a lovely family, and we hope we get to see them soon as the vice president's family soon after the election.

Check Out: Who is Jalen Ramsey's Wife? Details of Their Married Life! 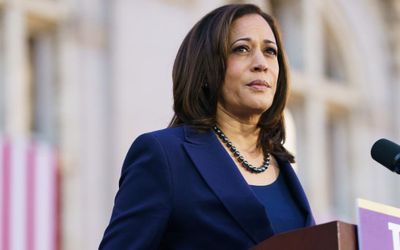