Home / health / Draya Michele Plastic Surgery — What Has She Said about It?

Draya Michele Plastic Surgery — What Has She Said about It? 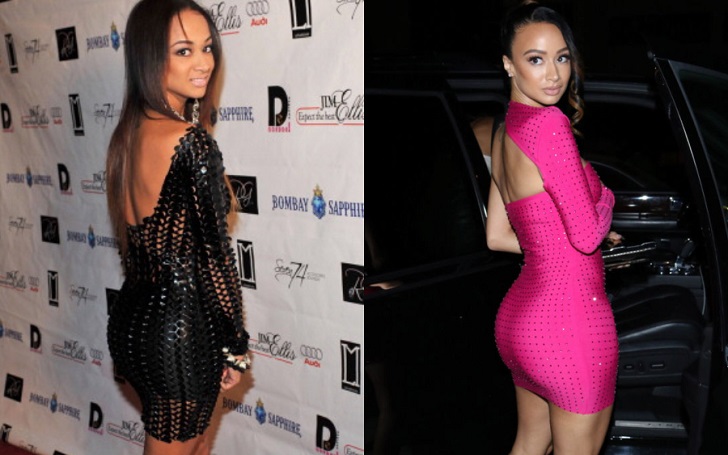 Draya Michele ain't letting the lockdown get the better of her fame. She's rising to the occasion as she, like usual, shares exotic photos on her social media handles and makes people drool at her body.

And when she does gather attention from Instagram, people go off about it on Twitter, and she has to go over there too, to calm them down. That's what happened when people started throwing plastic surgery tantrums at her on Twitter for her hips looking different than they used to.

Did she really get some work done to get that figure?
Photo Source: Draya Michele, Instagram

But despite it all, she's been fairly open about her journey of going under the knife, whether people believe it or not. So, here's all she had to endure from her so-called fans.

It was November 2019, a regular day with Michele posting raunchy photos of herself promoting a product. This time, she was posing for Rihanna’s 'Savage x Fenty' line on her Instagram Stories when people started noticing something different. Did her booty look different than before?

Then started the search for her old photos, from when she used to feature in 'Basketball Wives LA' and found out it was actually perkier than it used to be (the first comparison photo). Then continued backlashes as well as praises (which were in a surprisingly more amount) for having work done on her behind.

"Draya is one of many examples of plastic surgery done right. I love it," one emphatically wrote. Meanwhile, another tried defending her, "We really need to hurry up and destigmatize plastic surgery because y’all need to stop blatantly lying like this to us and making women feel like a body like that is attainable. Surgery is okay draya omg."

As for the criticisms, she hit back by clearing everything out with a tweet. She told everyone exactly how much plastic surgery she actually had. Nothing else, only the upper assets.

"For the record. I’ve never had lipo suction, s curve, fat transfer, and Brazilian butt lift.... for any confusion out there," she wrote on Twitter. "There isn’t a doctor out there that can take credit for anything on me except these boobs and that’s dr david Kim BEVERLY HILLS plastic surgery."

Still, following the tweet, people were talking about how she'd really had that done, judging by the pictures they dug out. Not everyone fully believed her either. But there were backups too.

The mother-of-two hasn't spoken about it since. She enjoys an impressive net worth of $1 million.

By the Way, She Did Have Breast Implants, Which She Considered Removing

You didn't think we'd miss that little detail from above, did you? Although people tend to not believe the Doctor is even real, she did get implants for her image and even considered removing them once.

When the 35-year-old started dating ex-fiancé Orlando Scandrick, her life and mentality changed for the better. She may have been charged with child endangerment for leaving her son Kniko Howard alone at home, but she got back on her feet as a mother when she was introduced to Scandrick's two daughters. This was back when she was starring in 'Basketball Wives LA'.

The pair actually had one child together (not in the photo).
Photo Source: Instagram

The model actually admitted to having made mistakes with raising her own son and that she loves the new family that she's been able to make with Orlando back in 2014. She shared an emotional Instagram post about it all, but it's deleted now, presumably something she did after the painful breakup.

She wrote in the caption, "These kids are my life… I didn't start out knowing everything about being the best mother, I had to learn as I go.. I know now that I have an exceptional son, who gets good grades, is healthy and ambitious, loves soccer and school. And Orlando : you added to my load but I want you to know that I love those little girls and I take pride in putting home cooked meals on those Tinkerbelle plates, brushing up that hair and doing finger curls, painting those toenails, and buying pink and purple of the tiniest little clothes. I taught those girls how to swim last weekend and I love our family. Thanks for giving me the experience of helping you with your babies."

Also: Did Karlie Redd Get Plastic Surgery for That New Look?

What does it have to do with her plastic surgery story? Nothing much really, except she wanted to look more like a wife material for Orlando. It's something that happened around the time she considered a reverse plastic surgery operation.

In a tweet in July 2014, she announced that in September that year, she'd be removing the breast implants she had because it didn't make her look good in her clothes.

"Saying bye bye to my ‘girls’ in September," she wrote. "I’m tired of these boobs making everything look all skanky all the time. Flat a** and chest makes clothes look better, girls. And take it from me, this fake tidday phase is outta style."

Find Out: Is There Any Truth to Famke Janssen's Plastic Surgery Rumors?

"I like natural boobs like Rihanna’s," she concluded. The tweet unsurprisingly is also deleted. So not one knows if she ever went forward with it. But in response to the November 2019 post, one fan did mention she recently had that reduction process. And it seems it was true, but it way back in February 2017.

There are two stories you get at once, both of them happened with Michele's mom, Valerie. Back in October 2014, Valerie lost 35 pounds and had kind of a sagging neck from the weight loss she'd had. And she was not happy with it. She used scarves or turtlenecks to cover the remains. So, Michele decided she wanted to gift her with a few plastic surgery operations, despite professing she looks great without it.

Maybe Valerie was ready to get back to the dating scene too.
Photo Source: Instagram

Michele's mother actually wanted to go through with it, and who better to take on the job than the renowned surgeon, Dr. Ashkan Ghavami, who, along with the mother-daughter, featured on one of the episodes of 'The Doctor'.

Valerie went to get a neck lift and a facelift, but she also got additional gifts along the way. Dr. Ghavami explained how he performed more hairline browlifts; so she'd never have to use Botox; upper eyelid lift and fat transfer.

Recommended: What Melissa Gorga Has Said Regarding Her Plastic Surgery Rumors

Stay tuned and connected to IdolPersona for more Plastic Surgery updates and other content from your favorite celebrities.