Home / lifestyle / Who is Graham Elliot's Wife? Details of His Married Life!

Who is Graham Elliot's Wife? Details of His Married Life!

Graham Elliot achieved great success in his career as a chef, restaurateur, and reality television personality. Get to know about his married life right here.

If you are a food-lover, you must be aware of Iron Chef contestants and famous chef Graham Elliot. The 45-year-old restaurateur gathered a wide fan following from his journey of preparing some finest cuisines in front of the television.

Over the years, Elliot rose to fame, participating in programs like Iron Chef and Top Chef Masters. If that wasn't enough, he also became the judge of the first six seasons of 'MasterChef' and its spin-off 'MasterChef Junior.'

While the three-time nominee keeps getting the media spotlight from his career on screen, he prefers to keep his personal life in a shadow. Like the famous saying, behind every successful man is a woman; Graham has his wife to be thankful for. So, today we bring you close to the married life and wife of the award-winning chef.

Graham Elliot is fortunate to replicate his professional life success in his romantic life as well. Yes, the former MasterChef judge is a married man and couldn't be happier. Getting into the details, he tied the knot with the charismatic Allie Elliot.

Although many expect the celebrity wife to support him when Graham is down and tired from work, things are different in their household as she also happens to be his business partner.

Unfortunately, there isn't any precise record of when the love birds got married or where they had their wedding ceremony. Over the years, they made several appearances together on the television. Surprisingly, the pair participated in the Bank of America Chicago Marathon and finished the race within 6 hours.

Graham Elliot was the judge of MasterChef in its first six seasons.
Photo Source: Instagram

The 45-year-old struggled through an immense weight loss regime back in 2013, as he had surgery, which resulted in him losing 150 pounds. Fortunately, his beloved wife, Allie, stood by him throughout the hardships and supported him in the inspiring yet challenging journey.

Graham Elliot: A Father Of Three

Graham Elliot is often seen on the television in several food-based programs. However, that in no way means that he doesn't give time to his wife and family. Interestingly, he and his spouse, Allie Elliot, gave birth to three adorable children shortly after married. They are named Mylo Ignatius, Conrad Matthias, and Jedediah Lindsay.

Even though Elliot remains busy with work, he segregates enough out of his schedule to spend with his kids and give them the best possible childhood. With a staggering net worth of $1.5 million, he makes sure that his children live lavishing life and go to the best possible schools.

Also, See: Who is Marc Gasol's Wife? Details of His Married Life!

The Cookbook author often posts pictures with his family on his official Instagram handle. Similarly, Graham loves playing guitar whenever he isn't occupied with work. Thus, with three children and stable life, Elliot's personal life couldn't be happier as there are no signs of any potential divorce that he could have with his partner. 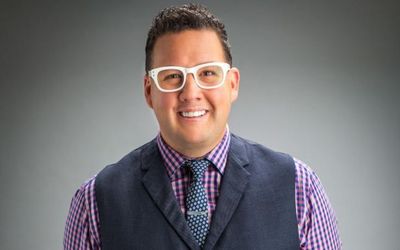