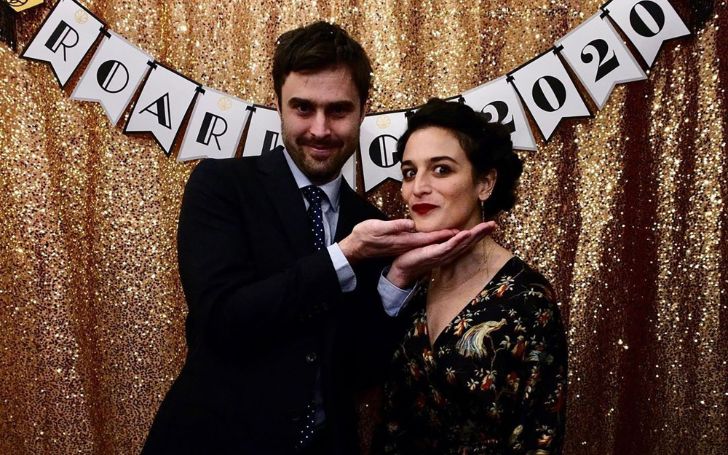 The Big Mouth actress Jenny Slate is excepting her first child with her fiancé Ben Shattuck.

Recently news hit the world about Jenny Slate being pregnant with her first child with her fiancé Ben Shattuck. This happy news placed a long smile on the face of many. All of them blessed the lovely couple for a brighter future as parents.

The American actress, 38, shared her pregnancy news with her loved ones on Thursday's episode of "Late Night With Seth Meyers." As soon as Slate appeared on the screen, the gorgeous comedian made the happy announcement adding a sense of humor.

The "Little Weirds" author, Slate, was asked about her time during the pandemic by Seth Meyers, and while replying how her nine months of world shutdown went, she answered;

"Let me tell you, on night one of the lockdown, we had a really romantic night of being together, real sweet with my fiancé," further she added, "And then I did what everyone else did. I kind of hunkered down and baked a lot of bread. But I just want to say I think I might have baked too much bread or eaten too much bread. You tell me, Seth."

Saying that the "Big Mouth" star then stood up to show off her baby bump for the camera while wearing a fitted black dress.

Furthermore, Slate joked about feeling different and replied to Seth that her last nine months been real pregnant for her.

The "Obvious Child" cast announced her engagement with her beau in September 2019. As per Slate's Instagram caption, her lovely fiancé took her to the city of love, France, and made a picnic. Then Shattuck made her feel happy and free and then following that, he asked her to marry him and to which she answered with a screamed YES.

While Slate is busy acting and writing novels, her future husband works as the curator for the Dedee Shattuck Gallery in Westport, Massachusetts, owned by his mother, as Daily Mail noted. The pair first spotted together publicly in January 2019 at the Sundance Film Festival.

Before Ben, the actress was married to editor Dean Fleischer-Camp. The former duo watered their marriage from 2012 to 2016. After then, she had an on and off relationship with Captain America, Chris Evans, until 2018.