Home / lifestyle / Who is John Goodman's Wife? Details of His Married Life

Who is John Goodman's Wife? Details of His Married Life

Grab all the details on the married life and wife of the American actor John Goodman.

John Goodman is best known for his portrayal of 'Dan Conner' on the ABC TV series 'Roseanne,' which aired from 1988 to 1997. The show won him a Golden Globe Award for Best Actor in 1993. He again reprised the role later in the sequel series 'The Conners.'

John Goodman is a regular collaborator with the Coen brothers on such films as 'Raising Arizona,' 'Barton Fink,' 'The Big Lebowski,' 'O Brother, Where Art Thou?,' and 'Inside Llewyn Davis.' He is also a voice actor, working on animated movies like 'The Emperor's New Groove' franchise, 'Monsters, Inc.' franchise, 'The Jungle Book 2,' 'Bee Movie,' and 'The Princess and the Frog.' John Goodman enjoyed a successful career of 30 years, but many people are curious to learn about his personal life rather than only his professional works. Below we compiled some details on the married life and wife of John Goodman.

Who is John Goodman's Wife?

Currently, John Goodman is married to Annabeth Hartzog. John's wife Annabeth is originally from Bogalusa, Louisiana, in 1989. They are married for over 30 years. The couple met for the first time at a Halloween party in 1987 at Tipitina's music club. At the time, he was filming 'Everybody's All-American' in New Orleans.

Annabeth was also a fine-arts student at the University of New Orleans. And it was Annabeth who made the first attempt at talking to him as John recalls: 'I went to this Halloween party, and she walked up to me and said, 'Hi.' I couldn't figure out why anyone that pretty was talking to me.'

The two soon started dating, and in the spring of 1989, John Goodman proposed on the Mississippi River. After they married in 1989, they welcomed their daughter, Molly Evangeline Goodman in 1990. Molly currently works as a production assistant in the film industry. The couple currently resides in the Garden District of New Orleans.

Also See: Who is Scott Stallings Wife? Details of His Married Life

As a production assistant, she worked in some successful projects like in the television series 'New Girl.' Her other miscellaneous art projects are 'Aquarius,' 'The Last Tycoon,' 'Strange Angel,' and many more. She served as a producer and editor on her father's movie, 'A Love Saga with John Goodman.'

John Goodman was born in Affton, Missouri. His father, Leslie Francis Goodman, was a postal worker who died of a heart attack when John was two years old. Goodman's mother, Virginia Roos (née Loosmore), was a waitress at Jack and Phil's Bar-B-Que, a retail store worker, and also took in laundry to support the family.

John Goodman's siblings include his younger sister Elisabeth and older brother Leslie, who is 14 years his senior. John is of English, German, and Welsh ancestry and was raised Southern Baptist.

Check Out: Who is Yo Gotti's Wife? Details of His Married Life 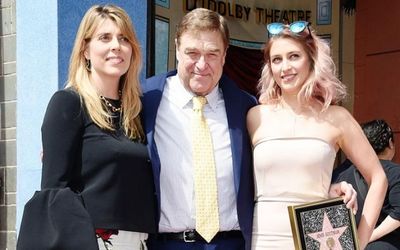