One of Hollywood's most handsome actors, Josh Duhamel, is famous for his various roles in movies and television serials. He has starred in over 30 films and multiple television shows.

Born on November 14, 1972, as Joshua David Duhamel, he has appeared in the live-action Transformers franchise. Thanks to Josh's successful career as an actor and former model, he has gathered a massive net worth of $20 million.

"Transformers" actor Josh is famous for all of his roles. Many of his fans are eager to know about his relationship status, about his wife? Here are the details of what we know about him.

The Transformer and Love Simon star Josh Duhamel and former Miss World America, a model, TV host Audra Mari announced their engagement on January 8 after two years of courting. The 49-year-old actor popped the question on January 8 to his girlfriend on her 28th birthday.

Josh and Audra took their Instagram account to announce their engagement. Moreover, the couple's engagement took place on the beach when the sun was setting. In the photo Duhamel posted, he holds out a piece of paper in which "Audra Diane Mari, will you marry me? Was written."

Josh Duhamel posted the photo with a caption that their next part of the relationship is on, and Mari found the bottle in which the actor kept the message. He even said that the model said Yes to his question. Similarly, the former Miss World America shares the same image on her social media account with a caption: "my heart is so happy ... I love you @joshduhamel."

Duhamel and Mari started dating in 2019 after divorcing his ex-wife, Fergie. As per the source, Josh was "really happy" with Mari, whom he'd begun seeing romantically "seven or eight months" prior.

The Transformers star and his fiancée, former Miss World America Audra Mari, were photographed passionately kissing at a Toronto airport in October 2019. However, the lovebirds were dressed casually and shared an intimate smooch on the lips.

In December 2019, The Love, Simon actor and model Audra Diane Mari attended a holiday party in Los Angeles. According to the onlookers, the couple showed minimal PDA, and they were still inseparable throughout the gathering.

As per Josh, the reason behind his relationship with Audra is his intense desire to have a happy family by upbringing babies into their life. Since he is not young anymore, he wanted a young partner to share his kids and have a happy family.

Audra Mari is not the first love of Josh Duhamel. He was previously married to singer Stacy Ann Ferguson, popularly known as Fergie. In a Catholic ceremony at Church Estate Vineyards in Malibu, California, Josh and Fergie shared their vows on January 10, 2009.

Josh and Fergie were in a marital relationship for eight years and had a perfect little family of three. Moreover, they welcomed their son Axl Jack on August 29, 2013.

But, unfortunately, what went wrong in their relationship is not known; the two announced their split and divorced in a joint statement on September 14, 2017. The duo shared that "with absolute love and respect, they decided to separate as a couple and they wanted their family to adjust before sharing the news with the public."

Related: Who is Lisa Boothe? Who is her Husband? Detail About her Relationship

Duhamel was romantically linked with many people before his relation with Audra and Fergie. In 2018 before meeting his fiancée Audra, he was in love with Eiza González. In addition, he was also involved with Kristy Pierce from 2001 - 2004. Furthermore, the actor was rumored to be in a relationship with Nicole Forrester in 2009. 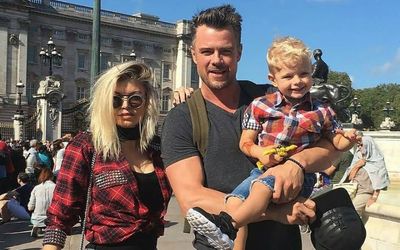 Josh Duhamel's Girlfriend in 2021: All About His Love Life