Home / lifestyle / Kevin Hunter has a Son & Daughter! Learn all about his Kids here

Kevin Hunter has a Son & Daughter! Learn all about his Kids here

Grab All The Details On Kevin Hunter, Son And Daughter!!

Kevin Hunter is an American television executive. He has a net worth of $10 million, as noted by Celebrity Net Worth. Hunter is well-known as the ex-husband of Wendy Willaims, a talk show host and television personality.

Hunter rose to prominence as the co-executive producer of her popular talk show, The Wendy Williams Show.

Kevin Hunter was born on September 17, 1972, in Ontario, Canada. There is short to no information about his family and early life. People who knew him in his youth said he was always ambitious and hungry for success.

Hunter and Williams tied the knot on November 30, 1997. Kevin Hunter Jr., their only child, was born on August 18, 2000. Hunter and his ex-wife are both committed Christians. Williams has two missed carriages before giving birth to her son Kevin Jr.

Hunter cheated on his wife and had a daughter with his mistress. Due to this reason, Hunter and Williams got divorced.

Kevin Hunter and Williams have been married for more than 20 years. Several issues have arisen in the relationship during this time, many of which were caused by Hunter. Williams discovered Hunter was cheating on her in 2001.

Kevin Hunter and Williams have been married for more than 20 years.
Photo Source: Instagram

This was not long after their son Kevin Jr. was born. In an interview with Essence, Wendy later stated that if her younger self had been told that she would continue living with someone who had cheated on her, she would have called it a lie.

Despite this, Williams chose to stay with her husband and has stated that she does not regret her decision. Wendy even stated that at that time, the cheating strengthened their marriage.

Several reports claimed in September 2017 that Hunter was having a decade-long affair with a massage therapist named Sharina Hudson. He reportedly moved her into his Fort Lee, New Jersey condo in 2015.

Click Here To See: Phoebe Dynevor is the child of a Famous English Actress! Learn more about her Parents here

As per Daily Mail, Hunter later moved her to a $765,000 house in Morristown. Williams later addressed the allegations on her show and vehemently denied them.

In 2012, a see tape began to circulate on the internet, showing a man who many assumed was Hunter and a woman who did not resemble Williams in the least. She refused to accept that this could be true, just as she has refused to accept other accusations of infidelity against her husband. 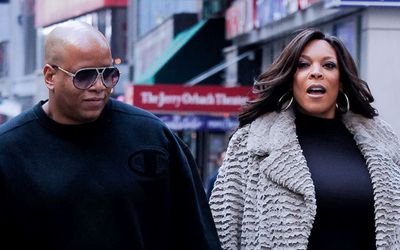