Kierra Valencia "Kiki" Sheard is a prominent American gospel singer, fashion designer, and actress. She is the daughter of the famous gospel artist Karen Clark Sheard, a member of the renowned 'The Clark Sisters.'

Kierra has been a subject of gossip lately for undergoing weight loss through cosmetic surgery. But people have little knowledge of why and how she experienced weight loss by such a method. Let's clear up the reasons behind the singer's choice for weight reduction by going under the knife.

Kierra Sheard, who enjoys a net worth of $10 million, first became aware of her body weight when she once went to visit her uncle, who has now passed away, in Las Vegas. She lived in Michigan at the time, and she had not seen her uncle in years. But when she visited him, Kierra says his first words were, "Girl, you getting as big as you can be. You need to get some weight off."

Kierra first became aware of her body shape when her late uncle once remarked she was getting 'big.'
Source: Instagram

Kierra was surprised to hear that remark from her uncle, and she got very upset. She got the reality check of her body shape at the moment, the thought of which she could not handle. She walked out and cried.

Find Out About: The Full Story on Lucie Donlan's Weight Loss Journey

Kierra's late uncle wouldn't be the only one to comment on her body after that incident. Her grandmother also used to bring up the subject from time to time. But soon, Kierra began to learn that her family's comments were not made to let her down but to the concern for her health.

I know someone who was my same age back then and she died from being obese. And if I hadn't had a family member to tell me that, I would probably be dead now or bigger than what I was. I understand [now] that they didn't say those things to hurt me, they said those things out of love.

Since then, Kierra decided to reduce her body weight to maintain a healthy body shape.

Kierra was now conscious of her body, and she had decided to make changes to her lifestyle. But it was difficult for her to get rid of her unhealthy eating habits. She had a bad habit of over-eating and she did not even exercise. In the same interview with Ebony, she relates her difficulty to change her eating habits:

But she had to get rid of her unhealthy habits to really create a change. She had already made a decision:

I made that decision to live a long life, understanding that diabetes runs in my family and I don't want to die soon. It's gotten to a point where I really care about my weight.

This led Kierra to think about her body seriously. She started by cutting carbohydrates and sugar from her diet, replacing them with healthier alternatives like eggs, fruit, and vegetables. She also started working out a little. She was finally able to lose 80 pounds by following such routines and reduced some fat amount from her body.

She, at the time, described her weight loss as her spiritual gain in her life. She relates to Ebony:

It was actually mostly a spiritual thing for me, too, because you can be greedy in a lot of areas. But in order to be like Christ, you can't be a greedy person. You have to display self-discipline. And once I grew in my walk with Christ, that's when I really started concentrating on my weight.

She also did not stop her new and healthy habits, at least for some time, before a tragic thing happened.

But Kierra's Weight Loss Did Not Last Long, and She Gained Weight Again

She was still continuing the weight loss routine after her weight reduction. She once even revealed that she used to work out before every show in her hotel room. That continued until one day, she heard the tragic news that her friend Tamika Juanita Halliburton passed away due to a blood disorder.

Kierra was emotionally devastated by her friend's death, which led her to overeat to cope with the pain.
Source: Instagram

She was devastated by the news of her dear friend's death. She started to eat a lot in order to cope with the pain of her friend's demise. As mentioned in an article, she recalls:

Sadly, I lost her to sickle cell, and I noticed that I completely stopped working out and just started eating whatever I wanted.

That's how she started to gain weight again, and this time it started getting worse.

The Second Time, Kierra Had to Go Under The Knife to Lose Weight

Kierra's friend's death had made her emotionally devastated and left a deep scar in her heart. Besides, she was also struggling with her weight as she had returned to her old eating ways. Plus, as she gained weight, she also had to worry about another thing that made her lose weight in the first place: body image.

This time, her condition was much worse. Her doctor had told her to change her eating habits, which she did, but she did not exercise. But somehow she managed to lose weight, but because it did not happen the way she expected. As her weight gain was much worse than before, and even though she removed excess fat from her body, she was left with stretched skin caused due to her former obese body shape.

Kierra had to undergo a cosmetic surgery procedure to throw off excess skin from her body. Many people think that she underwent weight-loss surgery, but in fact, she sought to go under the knife to remove stretched skin. Kierra clears the things up as mentioned in an Empowering Everyday Woman:

It's not a weight loss surgery that I had. It's a cosmetic surgery, and that surgery got rid of the [excess] skin.

The gospel singer finally got rid of her excess skin and also the excess body fat. Her body skin had stretched beyond the point where it snaps back into place, and she fixed it. She said to Empowering Everyday Woman:

Although she was in a much better body shape before, it seems she gained some weight as of 2022. Her gained weight reflects in her recent Instagram posts. We hope she maintains her body weight and remains healthy and fit.

Nevertheless, if her current status doesn't harm her health and if she is good with her weight, we have nothing to say. 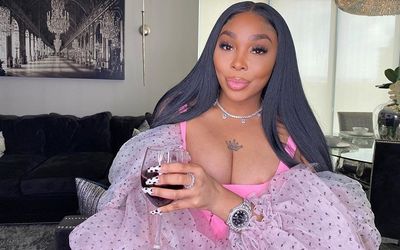