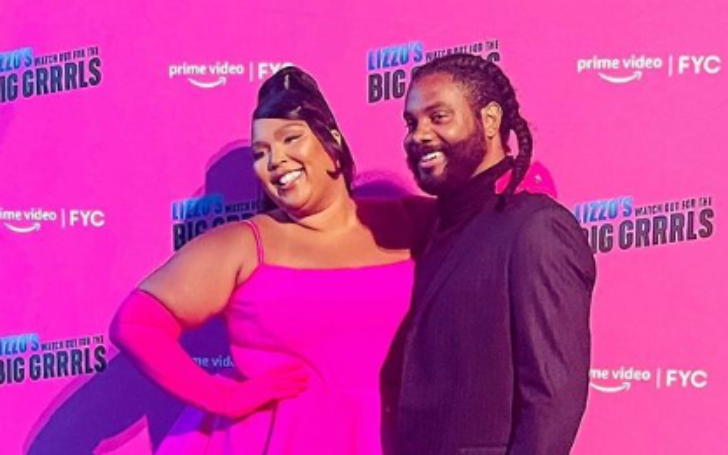 As per Daily Mail, Lizzo and her boyfriend Myke Wright have made their red-carpet debut!

On Saturday, the pair attended a "For Your Consideration" event for her Amazon Prime reality competition series Watch Out for the Big Grrrls, which aired in March.

Lizzo and her boyfriend Myke Wright have made their red-carpet debut!
Photo Source: Instagram

Lizzo, 34, wore a hot-pink mini dress with spaghetti straps, matching leggings, elbow-length gloves, and platform shoes in the same color for the celebrations, while her comedian partner looked dashing in an all-black suit. She is proud of her body shape.

Lizzo also got Instagram-official with her fiancé, posting photos from the celebration on her page on Saturday.

She provided two red carpet photos of the couple, as well as a close-up of her hand resting on his as she flaunted her wedding ring, a diamond blossom ring.

The flutist also shared photographs and videos of herself posing on the red carpet and in front of the venue on her social media accounts.

Lizzo uploaded a snapshot of herself happy as she stood next to Loni Love, who interviewed her on stage at the event. She also included a photo of herself with one of her friends.

You May Also Like: Jennifer Lopez Wins the Generation Award at 2022 MTV Movie & TV Awards!

Lizzo's representatives did not immediately respond to a request for comment on the bling from PEOPLE.

While Lizzo has kept most about her relationship with Wright hidden, she did admit she had a boyfriend in April during an interview with Andy Cohen on his SiriusXM's Radio Andy show.

"You were pictured in L.A. in February with a mystery man at Craig's," Cohen, 54, remarked, referring to a photo taken on Valentine's Day that showed Lizzo dressed up in red and exiting the popular restaurant with her date.

"Are you and your partner still dating?" "Yeah, whatever, yeah," Lizzo said in response to Cohen's question.

When asked if her famous status made dating tough, Lizzo assured Cohen that finding the "perfect person" makes it simpler.

"No, not at all, if you've got the appropriate guy. It isn't even taken into consideration "Lizzo said. "Whatever that individual does, it should be mutually supportive."

Later in April, the three-time Grammy winner celebrated her 34th birthday with her partner at Craig's in West Hollywood, where they walked hand-in-hand.

Lizzo and her guy were spotted at Crustacean Beverly Hills in October 2021, prior to Valentine's Day and her recent birthday celebrations.