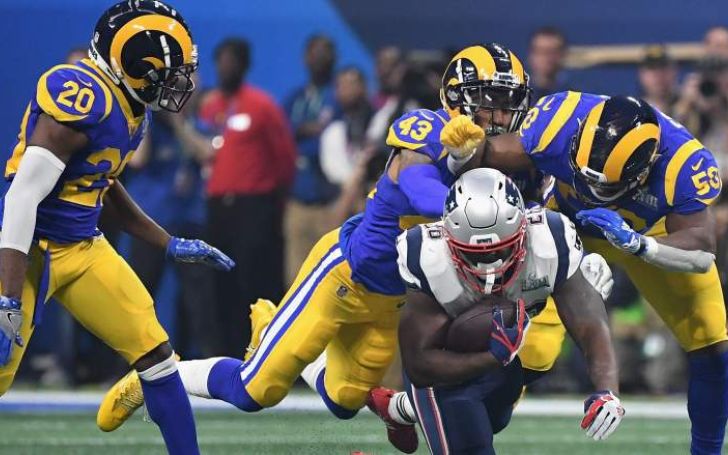 Patriots Are Trading Sony Michel To The Los Angeles Rams!

According to American sportswriter Adam Schefter, the Los Angeles Rams acquired Sony Michel from New England Patriots in exchange for a 2022 fifth and sixth-round pick.

On May 3, 2021, the Patriots announced Sony as a free agent after the 2021 season, after the fifth-year option on Sony's contract. Following that, on 25 August 2021, the Patriots traded him to the Los Angeles Rams as an exchange offer for a fifth and sixth-round pick in the 2022 NFL Draft.

Adam tweeted, ''Patriots are trading Sony to the Los Angeles Rams for two late-round conditional draft picks. New England gets back two picks; the Rams get needed talent and depth at running back.''

Running Back Sony Michel, who played three seasons in New England, now is the running back in the Los Angeles Rams of the National Football League.
Photo Source: Musket Fire

26 years old athlete, who had the 31st pick in the 2018 NFL Draft, played three seasons in New England. He helped the Patriots to win against the Rams in Super Bowl 53. He rushed for 2,292 yards on 535 carries and 14 touchdowns.

Know About: Kanye West Is Legally Changing His Name To Simply Ye

Following the emergence of 2019 third-round pick Damien Harris as the lead back, the trade comes in. As noted by The Athletic, James White was established as a veteran presence and pass catcher whereas, rookie Rhamondre Stevenson showing flashes in two preseason games with New England.

The Rams are dealing with multiples of injuries after Sony left, as Cam Akers faces torn Achilles and is out for the season. Similarly, Raymond Calais hurt his foot playing against the Las Vegas Raiders on Saturday. In addition, in Monday's practice, Darrell Henderson sprained his thumb.