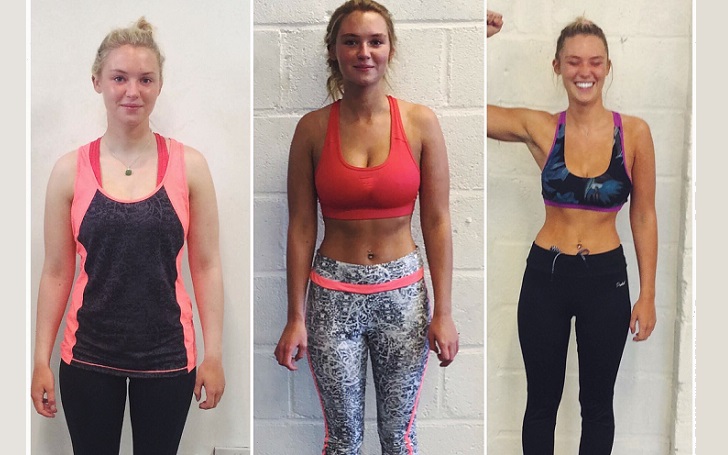 Grab All The Details On  Lucie Donlan's Weight Loss Journey!!

After Lucie Donlan entered the 'Love Island' paradise in mid-2019, she became the most in-demand woman in the villa. But all the drama she so successfully caused did have that effect. If not, her figure surely did.

Before entering the dating show, Donlan tried to maintain her figure to look her best and was still not stopping while the show ended. Because her weight did fluctuate during the time she was at the villa.

Lucie's weight loss journey started in the summer of 2017 when she was "stuck in a rut" and knew something had to change for her body. Under the guidance of her mother's friend's recommended sessions at Kapow Healthy Living, she lost a whopping two stones in just over a year. She gained the two stones back during the show and thus continued her routine to lose it all afterward. She also didn't drink during the time.

Weight Loss Secret Before the Show (2017): Training with Karen at 'Kapow Healthy Living' and 'Herbalife'

As it's widely known, Lucie Donlan is not only a surfer; she is also a surf coach and had modeling jobs in between as well. She documents in her blog that in late 2015 she "basically had no energy and at the end of the day I'd come home exhausted, eat a huge bowl of pasta and fall asleep on the bed."

In the mornings, Donlan would stay under the blanket as long as she could and skip breakfast. She wasn't exercising and thought teaching people to surf and lying on the beach was enough for the exercise. But when Lucie started noticing her clothes getting tighter, she started worrying about her weight. She was also just picked up by a modeling agency as well.

It was through chance meetings that Donlan described her mom, Celestine, bumping into one of her friends from a distant past who she hardly recognized "as she looked so amazing." Her mom then asked how she did it and got a card for a personal trainer the friend had been using. Celestine then told her to give it a go.

It was summer, and Lucie  writes, "As the surf coaching work dried up for the Summer, I decided to invest in myself and booked 12 sessions with the trainer my mum's friend had recommended, Karen at Kapow Healthy Living."

When Donlan did meet Karen at her gym, she found a certain glow in her face and body despite being almost double her age. The training sessions started. The first one was particularly difficult for her, you know, the first time, but Karen also treated her with a chocolate shake.

Lucie also got the Herbalife sachets from Karen and took them herself every morning. Herbalife is also one of the many sponsorships of Donlan since then, and she guarantees it helps her feel very energized.

The Success: Losing 2 Stone in Just Over a Year

At the end of July 2017, Lucie Donlan shared on Instagram that she'd lost about two stones in just over a year by training at Kapow Healthy Living and with such enthusiasm. She also mentioned reaching "the perfect weight for me."

Donlan also mentioned how healthy eating and regular exercise were all it took in the process. She went from size 12 to size six during the period.

"I've been training with @kapowhealthyliving over a year now," she captioned the photo above. "The first picture is when I first started, and the last one is where I am now. In just over a year I have lost around about 2 stone, and I have now reached the perfect weight for me...for #mondaymotivation this is achievable through healthy eating and regular exercise!"

Six Months Just Before Love Island Had No Drinking As Her Motto, But Gained the 2 Stone Back During the Show

Lucie Donlan was adamant about looking her best when she came on the show. So, the New Year's resolution for 2019 was no drinking until the competition. For almost half a year, she went without drinking.

During 'Love Island Unseen Bits' in June 2019, Donlan told the girls that she hadn't "had a drink since New Year's Eve." Of course, dieticians say such drinks have high-calorie value but zero nutritional value and add hunger is anything.

In terms of a change in diet, Donlan had also told OK Magazine that she doesn't smoke or drink, resisting the temptation of partying like a celebrity. "When I was younger, I'd always eat chocolates and pasta. When I started modeling at 17, I realized I needed to lose weight to be healthy. I don't drink or smoke, and I eat well and exercise."

Here's Another: Tommy Tomlinson's Weight Story is the Biggest One of His Life

However, the two stone loss might've been in vain as Lucie gained it all during the show. And it wasn't for her lack of trying. But having cameras all around for drama means she hardly had the time. She had to sit all day for the show.

Giving It a Go for the Second Time, She Announces Losing 2 Stone Since Leaving 'Love Island'

Soon after Lucie Donlan left 'Love Island,' it wasn't known that she'd gained the weight back. Although, it was kind of visible that her body figure had fluctuated before and after the time.

Donlan continued her weight loss journey afterward, and within the next six months, she lost it easily again. On January 7, 2020, she shared on Instagram, "You're sitting around all day. You do put weight on, so I did put a lot of weight on in there. But since leaving, I've lost two stones. I'm at my happy weight again now, so it's all good."

Someone asked her if she had a boobjob in the comments.
Photo Source: Lucie Rose Donlan, Instagram

The caption has been rewritten now if you're searching for it.

Regardless, it has been apparent since 2016 that Lucie has lost a significant amount of weight. Have you noticed her tummy size decreasing since then to pop the other parts of her body? Yeah... Anyway, it all comes down to the result — she's reached her happy weight again and doesn't intend to go back or even further now.