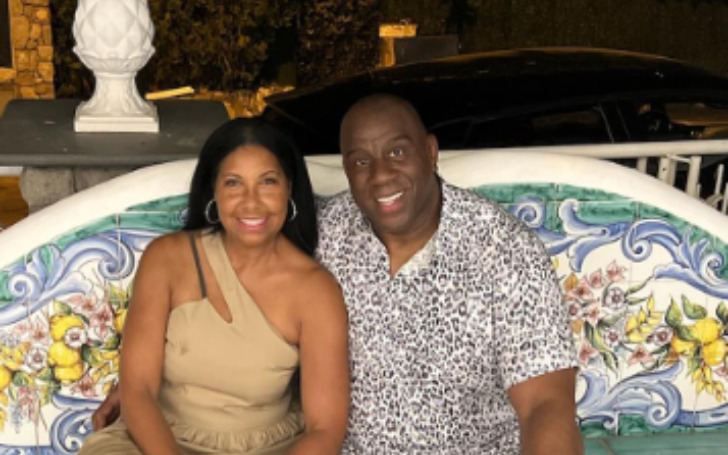 Learn All The Details On Magic Johnson's Personal Life!!

Magic Johnson has a net worth of $620 million as a retired American basketball player and entrepreneur. After winning high school and college basketball championships, he was selected first overall by the Los Angeles Lakers in the 1979 NBA Draft.

Johnson was the Lakers' point guard for 13 seasons. In his rookie season, he won the NBA Championship and the NBA Finals Most Valuable Player Award. Magic was the Lakers' former president of basketball operations. In this article, learn all about Johnson's personal life.

Who Is Magic Johnson's Wife?

Magic Johnson has a net worth of $620 million as a retired American basketball player and entrepreneur.
Photo Source: Instagram

According to Celebrity Net Worth, Cookie is a businesswoman with a net worth of nearly $50 million. She has created her own clothing line, CJ by Cookie Johnson, for women with similar figures who are looking for clothes that fit them perfectly.

Johnson and Cookie also established the Magic Johnson Foundation to develop and fund HIV/AIDS prevention programs. Cookie is a member of the board of directors for the organization. Magic and his wife live in Dana Point, and Beverly Hills, California.

Magic designs a popular brand of jeans, which is sold in luxury department stores such as Neiman Marcus and Bloomingdales, in addition to raising their children and continuing to advocate for additional research and educational programs.

Magic Johnson and Cookie first met as freshmen at Michigan State in 1977. The lovebirds first met at a club, where Johnson asked for her phone number before leaving for the Christmas holiday. He took her on their first date to a real steak house after she returned to campus after the holidays.

In September 1991, the couple married in a small private wedding in Lansing. They have one son, Earvin III (EJ), and a daughter, Elisa, whom they adopted in 1995. However, Johnson has a third child, Andre Johnson, whom he fathered with Melissa Mitchell before marrying Cookie.

Click Here To See: Who is Kathy Griffin's Husband? | Details on her Married Life

Andre was raised mainly by his mom. But Andre spent every summer with Johnson and later worked as a marketing director for Magic Johnson Enterprises.

Cookie wrote her first book, Believing in Magic, in which she discusses everything they went through from the day they met until they married, and then his HIV diagnosis. She writes in the book that after receiving the diagnosis, she chose to stay rather than leave, believing in him. Cookie also works to raise HIV awareness.

Magic Johnson was born in Lansing, Michigan on August 14, 1959. His father, Earvin Sr., was a GM assembly line worker, and his mother, Christine, was a school janitor. Johnson developed an early interest in basketball after watching his heroes, such as Earl Monroe.

Johnson enrolled at Everett High School and joined the basketball team as soon as he could. When he was 15, he scored a triple-double with 36 points, 18 rebounds, and 16 assists, earning him the nickname "Magic" from a local sportswriter. Johnson's senior year, when he led his team to the state championship, cemented his reputation.

Magic received offers from every major university but chose to stay close to home and attend Michigan State University. In 1979, he led his team to the NCAA championship game against Indiana State University and their star player Larry Bird.

Their match became the most-watched college basketball game ever televised, launching one of the sports' greatest rivalries. Michigan State went on to defeat Indiana, and Johnson was named the Final Four's Most Outstanding Player.

There was no greater pressure, according to Magic Johnson than telling his wife Cookie about his HIV diagnosis

As per People, Magic Johnson claims that informing his wife Cookie about his HIV diagnosis was the "most difficult" thing he's ever had to do. In an interview with Gayle King of CBS Mornings, which aired on Thursday, the couple discussed the impact of the diagnosis on their relationship.

Magic Johnson claims that informing his wife Cookie about his HIV diagnosis was the "most difficult" thing he's ever had to do.
Photo Source: Instagram

"It was difficult because I loved her so much and I didn't want to hurt her," Magic explained to King. "I've played against some of the world's best basketball players, right? I've participated in championships. I've been in nine (NBA) Finals, so I know pressure. But nothing put me under more pressure than driving home to tell her."