Who is Matthew Lewis Wife? | Insight into Neville from Harry Potter's Married Life 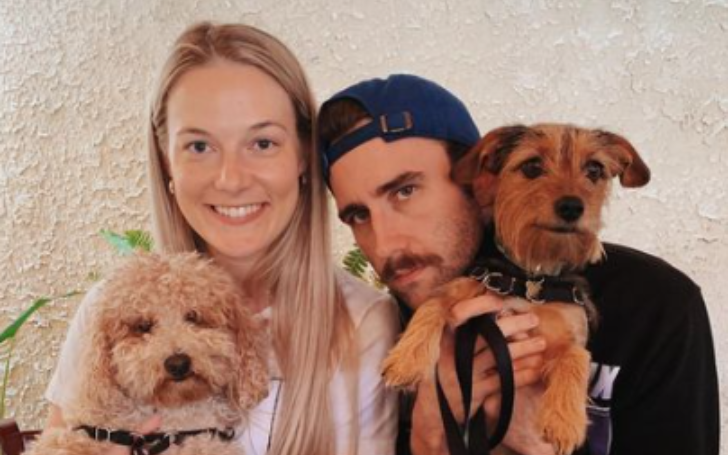 Grab All The Details On Matthew Lewis' Wife!!

Matthew Lewis has a net worth of $10 million as an English film, television, and stage actor. He is best recognized for his role in the Harry Potter films as Neville Longbottom.

Lewis has been acting since he was five years old, beginning with minor roles in television shows. 5'11'' tall actor has also appeared in movies such as The Sweet Shop and The Syndicate, a five-part TV series.

Who Is Matthew Lewis' Wife?

Matthew Lewis' wife is Angela Jones. Jones is a lifestyle blogger who focuses on fashion, style, and home living. She began blogging to stay in touch with her friends and family after moving away from home for the first time.

Although Jones, a native of Central Florida, has no plans to turn blogging into a career, she has become passionate about it and has a desire to connect with other people who share her interests around the world.

Angela's initial ambition was to become a travel blogger. Although she enjoys exploring new places, she realized that it was not fun because she preferred to savor the moment rather than record it.

You May Also Like: Who is Holly Robinson Peete's Husband? | Details on her Married Life

In her blog, Jones stated, "Now I realize how much I enjoy sharing fashion and my everyday looks, as well as general lifestyle topics like positive thinking and the like. I'm still trying to find my place, which I believe is my most difficult challenge."

Blogging has also helped Angela with overthinking by organizing her thoughts. While she has an outgoing personality, Jones admits to being nervous about meeting new people, which led to generalized anxiety, which she has learned to manage.

How Did Matthew Lewis And Angela Jonas Met?

As per Hollywood Life, Matthew Lewis and Angela Jones ran into each other unexpectedly. While the Harry Potter films helped Lewis launch his acting career, it was through one of the franchise's films that he met his wife.

The couple first met at Universal Studios in Orlando in January 2016, where Jones worked as an event planner for the Wizarding World event. She was in charge of the event's VIP guests, and Lewis was among those invited.

Angela's dream job was event planning, and she believed she could do it for a long time. She did, however, quit her job to be with Matthew. After dating for eleven months, Lewis proposed to Jones in Paris, France, in November 2016.

Jones believed that marrying Matthew was the best way to put an end to their long-distance relationship. While still dating, the lovebirds communicated via social media apps such as FaceTime.

Lewis, according to Angela's blog, stayed with Jones at her home in Florida for several months. However, they moved to California together in November 2017.

Matthew Lewis and Angela Jones married in Italy in May 2018 after a romantic engagement in Paris. Jones was determined to begin a new chapter in her life with a second chance at marriage.

Jones' marriage to Lewis is her second, while he married for the first time. Angela and her ex-husband divorced in July 2016, and their wedding took place two years later.

Angela and her husband Matthew went on their honeymoon to Sicily after their wedding. Lewis' wedding comes three years after he made headlines when he appeared shirtless on the cover of Attitude magazine.

Angela mentioned in her blog that she admires Matthew's passion for knowledge because he continues to educate himself about global issues. If Lewis didn't know anything, he would look it up online and read it to her, according to Jones. Angela admitted that she isn't a big reader because she gets distracted easily, but she appreciates that her husband is.

On June 27, 1989, Matthew Lewis was born in Leeds, West Yorkshire, England. He is the son of Adrian Lewis and Lynda Needham.

Lewis grew up with his brothers Chris Lewis and Anthony Lewis. He went to St Mary's Menston Catholic Voluntary Academy.