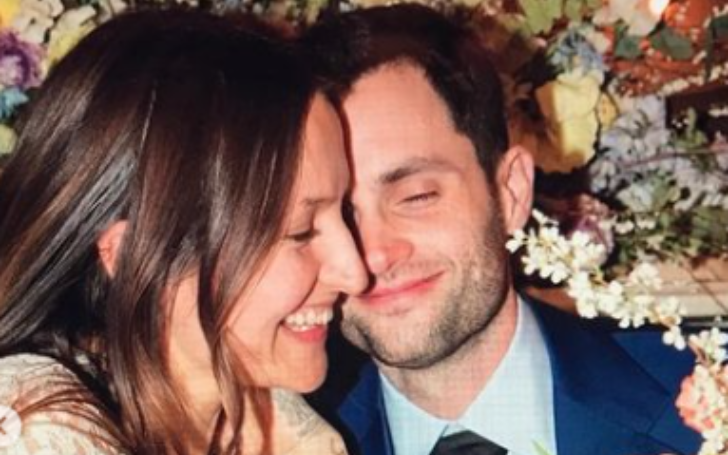 Grab All The Details On Penn Badgley's Personal Life!!

Penn Badgley is an American actor, producer, and musician with an estimated net worth of $8 million. 5'9'' tall star is best recognized for his roles as Dan Humphrey on Gossip Girl and Joe Goldberg on You.

The 35-year-old actor has almost 30 acting credits to his name. Badgley is also the lead singer of the band MOTHXR, which released the album Centerfold in 2016.

Yes, Domino Kirke and Penn Badgley are still together. Badgley and Kirke married in 2017 and are deeply in love. He wrote her birthday note on Instagram in 2019. "A very beautiful person, you seem to light up practically everyone you encounter, like a 99 percent success rate," he commented with a goofy video of her playing in the snow.

"You inspire others to be honest, fearless, gentle, and expansive." Your immense talent for empathy is clear, and it can warm anyone like a burning stove." "For you, I always aim to be a source of joy," Badgley said at the end of the mash note. "I'm so delighted we're married."

Badgley and Domino wedded in two separate ceremonies. The pair married on February 27, 2017, in a courthouse in Brooklyn, New York. Domino wore a short-sleeved white lace gown, while Badgley looked dapper in a navy blue suit and black tie.

You May Also Like: Is Kenny Chesney currently Married? Who is his Wife? All Details Here

On June 24, 2017, they held a second, star-studded wedding in upstate New York. Kirke wore many elegant gowns for the occasion, including a lovely beige-colored sleeveless gown with a draped-lace overlay that displayed her tattoo-covered arms.

How did Penn Badgley Meet His Wife, Domino Kirke?

Penn Badgley and his wife Domino Kirke keep their romance private, so it's unclear how and when they met. However, the couple went public with their love in 2014 with some PDA-filled appearances.

Penn Badgley and Domino Kirke keep their romance private, so it's unclear how and when they met.
Photo Source: Instagram

"They've been dating for a while. They have a number of shared friends. "It's a very mature and free relationship," a source told Us Weekly in July 2014, noting the two share musical tastes and interests. Kirke was seen attending a gig by Badgley's band, MOTHXR, while he reciprocated by tweeting about the release of one of her singles in 2015.

When Penn Badgley and Domino Kirke married, he adopted Cassius Riley, her son with musician Morgan O'Kane. Kirke afterward praised Badgley's abilities as a stepfather. "He doesn't have to be 'dad' so he can have more fun with him," Kirke told Us Weekly in 2019.

"It's absolutely lovely. The stepparent issue is absolutely unfamiliar terrain for me because I didn't grow up with one, but... he takes extremely good care of him."

As per The Things, James, a boy, was also born to the couple in August 2020. When the couple first revealed they were having a child, they were candid about their fertility issues, mentioning they had suffered from multiple losses.

"Pregnancy after loss is a whole other thing," Kirke posted on Instagram. "We were prepared to give up after two consecutive miscarriages. I stopped believing in my body, and I began to realize that I was finished. I've heard and seen it all in my role as a birth attendant. To be in my own experience and respectfully distance myself from the losses I have witnessed requires all of my strength.

Kirke acknowledged that being a doula had helped the couple get through these difficulties. Kirke stated on Instagram, "When I was pregnant at 25, I knew nothing. "There was none for me. I jumped in blissfully uninformed of the secrets of birth. I value my birth community and the information I have now that I have ten years of experience to pull from.

Penn Badgley had several famous flings before marrying Domino Kirke. Between 2007 and 2010, he dated Gossip Girl co-star Blake Lively. After his separation from Lively, Badgley was romantically linked with actress Zo Kravitz in 2011. She is the daughter of actress Lisa Bonet and singer Lenny Kravitz.

According to Us Weekly, this romance between Badgley and Kravitz ended two years later "on excellent terms." In truth, it "wasn't a terrible breakup," according to the insider, but rather an issue of timing: "They are at two distinct stages in their careers." They simply did not have time for one another."