Charlotte Flair is an American professional wrestler, author, and actress. She is currently signed to WWE, where she performs on the Raw brand under the ring name Charlotte Flair.

Recently news broke of Charlotte getting engaged to her boyfriend. Let's check out who's the lucky man.

Charlotte is one of the biggest stars in pro wrestling and daughter of WWE Hall of Famer Ric Flair went public with her relationship with Andrade back in April when the two walked the red carpet at a Wrestlemania 35 event.

Andrade real name Manuel Alfonso Andrade Oropeza is a Mexican professional wrestler himself, currently signed to WWE, where he performs on the Raw brand under the ring name Andrade. The pair is now officially engaged after her WWE superstar boyfriend, Andrade, popped the question on New Year's Eve!

Making their engagement official, now the WWE power couple is set to be married. People are still waiting on a good look at Charlotte Flair's ring. And also yet to know when the date of their marriage will be.

"Congratulations To My Beautiful Daughter @MsCharlotteWWE And An Awesome Young Man @AndradeCienWWE On Their Engagement!" Flair tweeted on New Year's Day. "So Happy, So Proud! What A Way To Start 2020!"

What was her dad's first impression of her beau the first time he met him? Another fan asked Charlotte Flair, 'He's a good wrestler!' Flair said her father remarked.

Ric Flair is very happy with his daughter’s choice. The Nature Boy was watching his soon to be son-in-law on RAW this week, and he only had praise to throw Andrade's way.

Flair said, "After Last Night's RAW, In My Opinion, The Great @AndradeCienWWE Has Moved Into The Elite Class Of Being One Of The Top 5 Performers In The WWE! The Other 4 Know Who They Are Because I Have Already Told Them. This Isn't Up For Speculation. This Is A Fact!"

Andrade won his first main-roster title on December 26, 2019, when he defeated Rey Mysterio for the United States Championship at Madison Square Garden, while he made news away from a WWE ring on New Year's Eve by getting engaged to fellow Superstar Charlotte Flair.

Kalisto responded to Andrade's latest United States Championship picture on social media by telling the RAW Superstar that he needs to learn how to fight from his soon-to-be father-in-law, Ric Flair.

Charlotte and Andrade, only made their relationship public on February of 2019. The exact story of their romance remains under wraps.

Andreda on a vacation with girlfriend Charlotte
Source: cageside seats

Andrade recently sat down with Super Luchas, where he shared how he and the former Women's Champion give each other advice.

"As we live in Orlando, we train at the Performance Center. She helps me a lot, gives me advice on how to handle the cameras, the promos. She knows a lot about all that. And I have taught her what I learned in Mexico and Japan. Moves, holds, how to get hit, how to hit, how to show more personality, many things she likes. She gives me advice, I give her advice. We are always helping each other, and that benefits us a lot in the relationship we currently have."

Charlotte - who underwent plastic surgery - had similar things to say about her fiancé as to how he is supportive of her in ways she requires to be supported.

Flair believes that Andrade understands her approach to the business because he has a similar background, and that's one of the reasons why they're compatible. The couple is yet to reveal their wedding date. 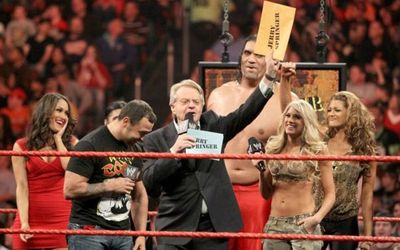