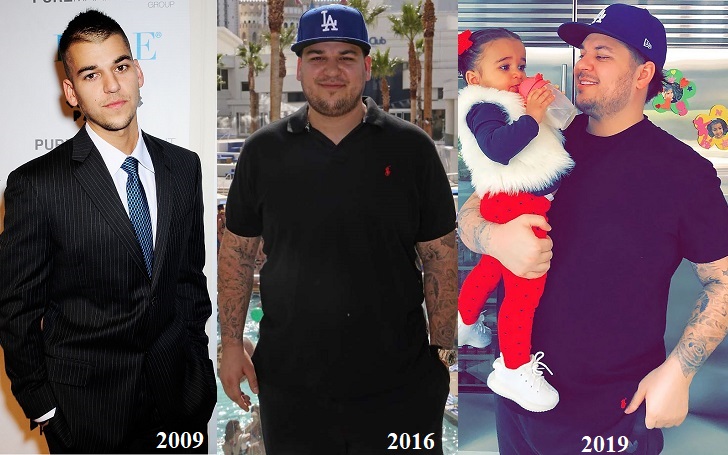 Isn't he a lot different now than he was 10 years ago? Of course, the age does it too, but that guy who dated Adrienne Bailon is not here anymore. Rob Kardashian's weight became a major problem after the Rita Ora breakup.

It's also one of the reasons the Kardashian son went away from the camera and didn't appear on 'Keeping Up with the Kardashians' at all. Remember the time he started to disappear. That's when his weight struggle started.

The relationship did not end in good terms.
Photo Source: Getty Images

Rob Kardashian became serious for weight loss in 2018 after being pressured a bunch of times from his family members as he was getting worse, bailing out on his sister Kim's wedding too. And now, he's even considering a weight loss camp too.

According to Rob himself, both his two breakups, with Adrienne and Rita, were allegedly because the other one cheated. While he wouldn't let the first one get him down, the second one sent him down the spiral (although Rita had something else to say about the breakup).

The two split in late 2012, and his weight became a real problem as he kept eating his problems away. According to his throwback picture via ET, it all started with a milkshake. Of course, he added 'hahaha' at the end of the caption of the Instagram post. And his mother claimed he'd gained 100 pounds by 2015.

The milkshakes were draining down the Kardashian son in 2011.
Photo Credit: Denise Truscello, WireImage

It became a real problem and even went on to be trending on Twitter. He even came out himself in 2014 to address the fact, just days before the Kim Kardashian-Kanye West wedding. It was a sarcastic tweet when he wrote, "So i found out i was trending for being fat … thank you all it really made my day :)" He wrote and deleted about his weight quite a lot at the time. Khloé Kardashian attempted to defend her brother from the bashes got in the comment sections.

Then, when the wedding in Italy came, he decided to not be seen in public, AT ALL, despite being invited too. And report has it he'd done suit fittings in Paris and wasn't too comfortable with as he weighed 300 lbs.

Rejecting Every Concern from His Family Before the Health Scare

After the wedding, Kim appeared on 'Watch What Happens Live with Andy Cohen' and revealed why Rob didn't attend the wedding. She explained how he sent her "a long email" on the morning of the wedding with the reasons for being absent at the wedding.

And she's had it with his problems as she decided to push him to be in better health and started working out with him. In the midst of one of those workouts in August 2015, he shared the throwback picture. But that was not easy at all.

In October 2015, Khloé, who he used to live with at the time, was having a hard time with his reluctance to take it too seriously. "I've been working on my patience," she told People at the time. "I've been really trying. But I have my moments and I do snap. I've offered to get a chef, I'm like, 'What's your excuse?' But it's not just that. I can't win life for Rob. I have to wait until [he's] ready to do it for himself."

Every one of his family members was worried about him.
Photo Credit: Denise Truscello, WireImage

Aside from a personal chef, at another point, he was also rumored to have been offered to go to a fat camp of some sort in the past year. But he denied the rumor with another sarcastic tweet. "To the blogs saying I went to fat camp or rehab — LOL," he wrote in a now-deleted tweet. "Then why am I still fat you fools? Y'all must have run out of real news."

An intervention was also planned, but he didn't want any of it.

Depression was also a big part of his weight gain. The death of his father wasn't bad enough as every father figure he ever had were not staying for long. Fame had nothing to do with it, Kim Kardashian mentioned in an interview with Today's Matt Lauer in 2015.

Depression had a big part in his weight gain as well.
Photo Source: FameFlyNet/Getty Images

Then in December 2015, he was rushed to the hospital after reportedly falling ill at home. And reportedly, he had no idea he was diabetic. He was already disappearing from the public eye by then.

Blac Chyna Came Around to Change His Lifestyle, But It Was Not to Last

The calendar rolled off during the year 2016, and he was dating his baby mama Blac Chyna since January. He also claimed he knew he was aware of his Type 2 Diabetes condition and had just stopped taking insulin because it was inconvenient. "I didn't enjoy the routine," he told People in September 2016.

At the time, sure, Chyna's company was big on his weight loss journey.
Photo Source: Blac Chyna, Instagram

At the time, he credited the love of the new love of his life for his motivation to get better in terms of weight. He was 300 lbs at his highest weight but was 285 lbs that month and diabetes-free. While he was not comfortable with that weight, he mentioned he would never hide then on while still staying adamant about being out of the public eye.

Reportedly, Chyna encouraged him to cut out carbs and red meat off of his diet and go to the gym five days a week. And no cheating. He lost about 40 pounds when the relationship was at its best.

The couple was parents to daughter Dream Renée Kardashian on November 10, 2016. But it seems parenting was difficult as they announced the split in mid-December before reconciling in January 2017. However, the nasty situation they were in was not to be ignored — another cheating thing and another factor for Rob to get on the food train.

When his daughter came, the relationship just faded away with a bang.
Photo Source: Blac Chyna, Instagram

He was back to 300 lbs, according to his friends. The sources claimed he lost his will to live, and his daughter had a big part in bringing up from down under. Plus, Kim also urged their mom, Kris Jenner, to stop "enabling" Rob's unhealthy lifestyle with financial support.

Kylie Jenner Showed Some Love During Her Post-Pregnancy Workout, and Claims That There Was No Weight Loss Surgery

When Rob was with Blac, there came reports that he actually went through a weight loss surgery to lost those 40 pounds. And guess who claimed that surgery was the real reason. Blac made the claims about the surgery being worth $100,000 but defended herself that she didn't make him go through it.

It might've been in response to Rob's claim that Blac went through a secret post-baby surgery.

When 2018 rolled in, he made some serious changes for himself. After all the drama in his romantic life went away, his daughter was the reason left for him to be better for. And Kylie Jenner was there to support him after having her own daughter, Stormi. He was working out again.

"Rob's been taking his bonding time with Kylie to the next level and has been working out with her every other day and seeing the weight fall off has been huge in helping Rob get his confidence back," a source told Hollywood Life in March 2018. "Kylie challenged and pushed Rob to be better for (daughter) Dream, and that's all the motivation he needed."

He was reclusive at the time, but his 31st birthday pics shared by his siblings were proof he was getting better. The photo of him holding Dream was not holding his weight loss figure back. There were reports of him losing 30 - 50 pounds by October 2018.

The guy kept working for the better as he is trying to come out of hiding. And it's been gradual. While he may not have been ready to come back to 'Keeping Up with the Kardashians', he did tweet a photo from inside the gym in June 2019 as the first day of his new workout regimen.

During Kim Kardashian's low-key 39th birthday in October 2019, he appeared thinner as he shared a rare photo of himself in his Halloween costume matching with his daughter Dream. Although, he doesn't post on Instagram himself. While there aren't official reports of how much weight he'd lost, it seems he was trimming down pretty good.

With Dream being the main drive for his weight loss inspiration and partly being inspired by his sisters Kourtney, Kim and Khloé, he was working out and looking out for his diet. And in January 2020, a source even told People he was considering help at a weight loss camp.

"He is even considering getting help at a weight loss camp. He thinks a live-in fitness and health program might be the best option for him. If he starts losing more weight by exercising and changing his diet during a camp, he believes he will be able to stick with it at home as well."

He's since appeared once on 'Keeping Up with the Kardashians' in March 2020. For now, the lockdown has had some effect on him too. He's living indoors too. And it seems the reclusiveness has been a more viable thing for everyone else. Besides the point, he might need some more time to get out in public with confidence.