Grab All The Details On Rosalía Cozies Confirms her Dating With Boyfriend Rauw Alejandro!!

Rauw Alejandro is a singer and songwriter from Puerto Rico. He is well-known for his unique, self-choreographed dance moves as well as his smooth, tender singing voice since releasing his critically acclaimed debut mixtape, Punto de Equilibrio, in late 2016.

This talented artist has worked with Ozuna, Lunay, and Lyanno on LuzApaga and Lyanno, Alex Rose, Cazzu, and Lenny Tavarez on TodoRemix. These and several other collaborations led to Alejandro's nomination in four categories for Puerto Rico's Tu Musica Urban Awards in 2019.

According to MNS, Rosalía Cozies and Rauw Alejandro recently made their relationship public. To be more precise, Cozies announced the news on her Instagram after sparking dating rumors.

On Saturday, September 25, the Spanish singer celebrated her 28th birthday with a series of intimate photos that captured some of her celebrations with her boyfriend.

Rosalía cuddled up to Rauw in one image while he held up a video game controller. The "Con Altura" singer also took a sweet selfie of the two, showing Rosalía with a broad smile and Rauw playing coy with his hand over his mouth.

The PDA-filled celebration didn't end there for the couple. Rosalía posted an adorable video on TikTok of herself and the "Crame" artist participating in one of the platform's dancing challenges.

The duo stood next to each other in the short video clip shared on Friday, September 24, to form a heart shape with their arms. Rosalía twirled around while holding Rauw's hand shortly after.

That same evening, the Latinx celebrities weren't afraid to flaunt their love during a fun night out. Rosalía and Rauw were seen leaving The Nice Guy, a celebrity hangout in West Hollywood, California holding hands and smiling ear to ear.

Rauw Alejandro grew up in the Puerto Rican city of San Juan. His family moved to the United States when he was a child before returning to the island.

Alejandro's first love was soccer, which he pursued seriously while attending the Maria Auxiliadora School. Another hobby he had was music, but he never considered it a career until his football career was cut short by an injury during his adolescence. To cope with his disappointment, Rauw turned to music and began uploading tracks to Sound Cloud.

As Alejandro learned to sing and write songs, he put his dancing talent to use on local stages and in videos, where Alejandro met many musicians, producers, and dancers. He signed to the Under Music Group label, which helped him develop his writing and singing skills.

For more detail on celebrities' relationships, stay connected with us in Idol Persona. 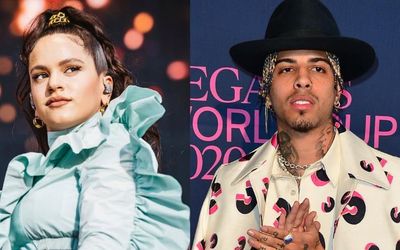