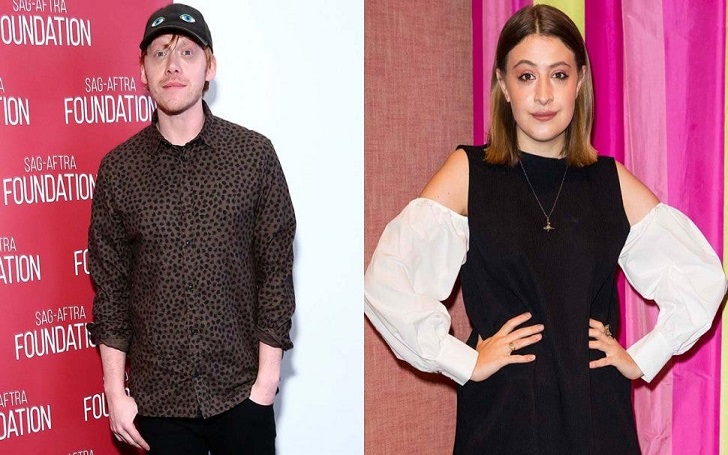 Rupert Grint, who enjoys a net worth of $50 million, won the heart of millions after starring as 'Ronald Weasley' in the super hit 'Harry Potter' films and became a part of our childhood. Apart from Harry Potter, the actor has worked on numerous movies and TV shows like CBGB, 'Wild Target,' 'Driving Lessons' and so on.

Rupert who came to step into the world of the limelight just at the age of 11 years, is extremely notoriously private about his personal life. Sure, anyone would be. But his is much more secretive than most. Still, his desire to respect his family's privacy is not at the least unprofessional.

Unlike his Harry Potter franchise co-stars Emma Watson and Daniel Radcliffe, Grint always managed to stay from controversial love affairs. Moreover, he has been head over the heel for only one girl, Georgia Groome for a long time. So, without any further delay let's dig straight into his love life.

Yes, around 10 years old relationship hasn't gone anywhere but upward for the Harry Potter star and his girlfriend, Georgia Groome.

Rupert Grint and his fellow actress, Georgia are one of the power couples in the entertainment industry.
Photo Source: Instagram

Though the couple started dating in 2011 however, how they meet and fell in love is a mystery only the two can tell. The rumors about their fling started a fan circulated their old snap on Twitter.

The pair sparked the rumors of marriage after they were spotted flaunting the matching band back in April 2019. However, Rupert clearly denied the news of him getting secretly married to Groome.

Rupert Grint And Georgia Groome Are Expecting Their First Child

Amid the Corona Virus crisis, Rupert Grint gave the reason for the celebration with the news of expecting the baby. On 9th April, Grint was spotted with the 'Angus' actress buying some essential goods where Georgia's baby bump can be seen clearly.

Moreover, Grint's representative even confirmed the news with People saying the pair are excited to announce the expectation of a baby and also asked for privacy at this time.

Though the news of Groome's pregnancy surprised everyone, Rupert clearly revealed to The Guardian back in the year 2018 that he wanted to become a father soon. What's more, the 31 years old even have thought the name of his son as "Ron" as he said,

“If I had a son, would I call him Ron? It’s quite a good name, but probably not. And Grint’s a tough name to pair a one-syllable first name with.”

Meanwhile, Grint co-star Daniel Radcliffe's love life with fellow actress, Erin Darke is going strong for many years. Likewise, the pair first met while filming the movie 'Kill Your Darlings' in the year 2013 and started their fling after some time.

Although Rupert Grint rarely posts anything on his Instagram account, he didn't hesitate to upload pictures of his newborn child. Yes, as of 2022, he and his wife, Georgia Groome, have already given birth to their daughter.

The Harry Potter star and his spouse welcomed their first child in May 2020. They named her Wednesday G. Grint. Rupert's daughter is 21-year-old as of now, and he recently talked about her on The Tonight Show Starring Jimmy Fallon.

According to Daily Mail, Grint's daughter loves to say the F-word when she is excited. Grint, 33, himself confirmed this on Jimmy Fallon's show and clarified that she learned it after hearing him reading Servant's scripts.

Don't forget to head to our News section for more exciting information and gossip of your favorite celebrities. And stay updated with Idol Persona to keep track of the entertainment world.