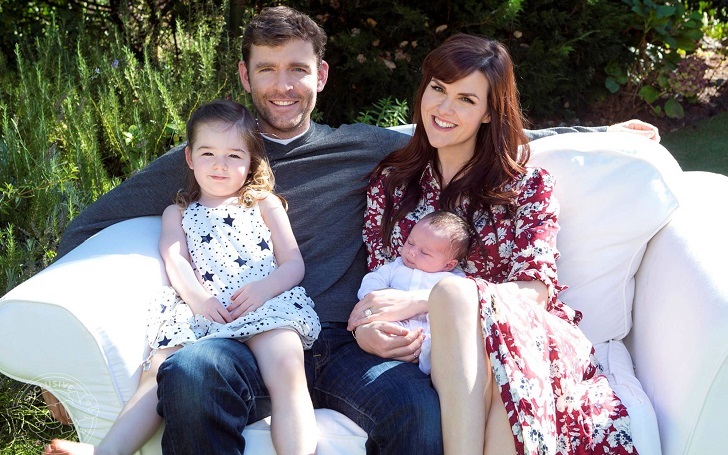 You all agree the transformation Sara Rue, who enjoys a net worth of $1 million, made to herself when hitting the thirties was extremely amazing. Yeah, we're talking about the 50-pound weight loss she achieved with 'Jenny Craig.' She's been a spokesperson for the show for a while now. But there's another aspect of her life that needs a better story to be told.

Rue has been married to her husband, Kevin Price, a teacher, since 2011 and has two kids with her (one adopted). And they have already celebrated a decade of togetherness over a year ago.

The wedding was also an impressive one. Rue decided to lay off her dieting days for that one day. Because there were two wedding cakes at the wedding while originally ordering three flavors, she wasn't giving up the joy she had for the best day of her life.

Getting It Out of the Way: Sara Rue Was Married Before Dating Kevin Price

Yes, if you didn't know this little fact. The 'Less than Perfect' star Sara Rue was married to her first husband, documentary filmmaker Mischa Livingstone, in 2001. The two separated in May 2006, but Sara only filed for divorce on September 21, 2007, at Los Angeles Superior Court, citing irreconcilable differences as the reason for it. It was finalized in 2008.

It's unclear which year Rue met now-husband Kevin Price, but the date was definitely on the Fourth of July (maybe 2007 or 2008). If you remember, the couple even had a beer pong bash during the wedding reception. They decided to do so because they met at one of those Fourth of July parties, and Price taught her how to play.

Of course, there would be glitches in any relationship. If you don't, there's something wrong with you. Sara Rue and Kevin Price, too, had rough patches a couple or two times in the dating stage of their relationship. At one point, Sara even broke up with him.

Sara Rue and Kevin Price, too, had rough patches a couple or two times in the dating stage of their relationship.
Photo Credit: Instagram

However, Sara says she gave her future husband a second chance because of the sex. "The sex. It's just so good. That's the truth." But for Price, she was always the one.

The two went on to get engaged in August 2009 as Price got down on one knee and asked her to tie the knot with him. And after getting engaged, Rue got determined to lose weight and went on the Jenny Craig program. Her then-fiance was her number one fan in the stands as he also volunteered to eat the food she did to support her.

Sara Rue had finally worn a bikini for the first time after losing 50 pounds and stopping being skinny because she felt comfortable already. Then the wedding was to come. The weight loss journey took time to think about it, especially with her new project, 'Shedding for the Wedding.'

Only in January 2011, after a year of discussion, the couple found a wedding planner, the "amazing" Rachel Hollis, who represented 'Chic Events.' "It's going really well all of a sudden," Rue told PEOPLE in January 2011 at the Audi And J Mendel Golden Globes Week kick-off bash. "We actually just hired a wedding planner, which we have been saying we were going to do for a year – and we actually did it."

The spectators said Sara Rue was the happiest she'd ever been at the wedding.
Photo Credit: Instagram

The planning went as smoothly as you'd think a relationship would go. Of course, the months were stressful. But the big day made it all the more worthwhile.

On May 21, 2011, Rue and Price became husband-wife with a sunset Pacific Ocean beachside wedding ceremony at the Bel-Air Bay Club in Pacific Palisades, California. They exchanged vows under a chuppah with about 100 guests watching them.

Sara Rue's decision to give Kevin Price a chance became her biggest, best decision yet, as two little kids made it into their happy little family. She announced the arrival of their first child via Twitter. Daughter Talulah Rue Price was born on February 9, 2013, after her due date.

The couple then welcomed their second daughter, Adelaide Rue Price, born in mid-October 2016. The decision for adoption did not come in a spin. They had always wanted to adopt. It was an open adoption with the birth mother of the baby.

Rue introduced the baby as a sister to Talulah right after birth through FaceTime.

Stay tuned and connected to IdolPersona for more celebrity relationship stories. There are more beautiful ones waiting.