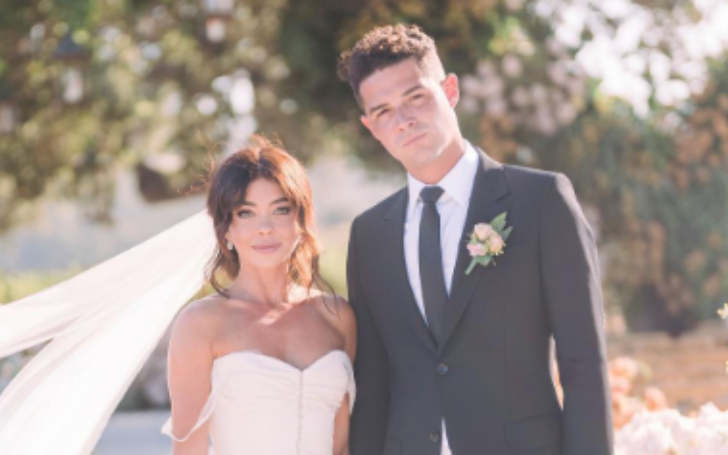 Grab All The Details On Sarah Hyland And Well Adams' Married Life!!

Sarah Hyland is a $14 million net worth American actress and model. Although a 5'2'' tall actress is best known for her role as Haley Dunphy in the popular sitcom Modern Family, Hyland is an accomplished actress with numerous other credits.

Hyland has received numerous accolades, awards, and honors throughout her career for her various roles in film and television projects.

As per Daily Mail, Sarah Hyland is married to her husband, Well Adams, who rose to prominence as a contestant on ABC's romance shows The Bachelorette and Bachelor in Paradise. On Saturday, the couple exchanged vows at the Sunstone Winery near Santa Barbara, California.

Sarah Hyland is married to her husband, Well Adams, who rose to prominence as a contestant on The Bachelorette and Bachelor in Paradise.
Photo Source: Instagram

Sarah accessorized with a bracelet and wore a white veil and a long train gown. Ferguson officiated the wedding, and the couple was seen sobbing as they exchanged vows at the altar. They were supposed to marry in August 2020, but the COVID-19 pandemic pushed the date back.

You May Also Like: Is Kelli Giddish Married as of 2022? | Her Relationship History

Last year, Adams told People that he and Hyland planned to marry in 2022 and that if pandemic-related delays occurred, they would go to Vegas or the courthouse. "We were supposed to tied the knot last year, but that didn't happen," he explained to the outlet. "We were meant to marry this year, but that did not happen."

"So now we're hoping for next year, or we're going to Vegas or the courthouse, or I don't know - well, I'm not sure about those last two. Isn't 2022 going to be our year?"

Sarah and Wells made their relationship public in 2017. They then announced their engagement in July 2019, followed by a small engagement party three months later.

How Did Sarah Hyland Met Her Husband?

Sarah Hyland revealed on Jimmy Kimmel Live! in 2018 that she met Well Adams when he "slid into my DMs." She remembered, "Have you seen the 'Slide Into the DMs' memes? That. He slipped into my direct messages. He was a fan of (my) show, and I thought he was funny. I saw him as the bartender and thought to myself, 'That's really cute!'"

Sarah Hyland revealed on Jimmy Kimmel Live! in 2018 that she met Well Adams when he "slid into my DMs."
Photo Source: Instagram

Hyland went on to say that the Bachelor Nation star's message was "sexy" but not "aggressive." "I was obviously single and thought, 'This is really awesome.' You're being very direct, "She went on. "But he was very confident and sexy, which I liked."

Their romance was made public in October  2017. A year later, Sarah credited Well with assisting her in coping with her kidney dysplasia. "He's seen the worst of me," she told Self magazine. "I believe this is why I feel the most beautiful in his eyes because he still thinks I'm beautiful after all of this."

"To have to go through those obstacles at the very, very, very beginning of a relationship when you're just getting to know someone was a really intimate start," Sarah continued.

Sarah Hyland was in a relationship with her boyfriend, Max Ehrich, best known for his role on The Young and the Restless. Their romance, however, was short-lived, and the couple split up in October 2008 after about a year of dating.

Sarah Hyland was in a relationship with her boyfriend, Max Ehrich, best known for his role on The Young and the Restless.
Photo Source: Instagram

Hyland, 31, met actor Matt Prokop in 2009 and moved in with him the following year. After years of abuse from Prokop, she ended her relationship with him in 2014.

Sarah met Dominic Sherwood on the set of their 2014 film and began dating him. Despite dating for over two years, the lovebirds decided they were best off as friends and peacefully split in 2017.

Sarah Hyland was born in Manhattan, New York City, on November 24, 1990. Hyland was always destined for a career in the entertainment industry, having been raised by parents who were both actors. Ian, her brother, is also an actor.

At the age of four, Hyland began her own acting career, giving voice work for different projects and reserving roles in television commercials. Sarah was homeschooled in her childhood, and her mother taught her while acting as her personal acting coach.

Sarah also spent a lot of time traveling with her father as he toured the country with various theater companies. She went to public school after the second grade before being accepted into the Professional Performing Arts School.

Who is Matt Prokop's Girlfriend? Learn all the Details of His Relationship