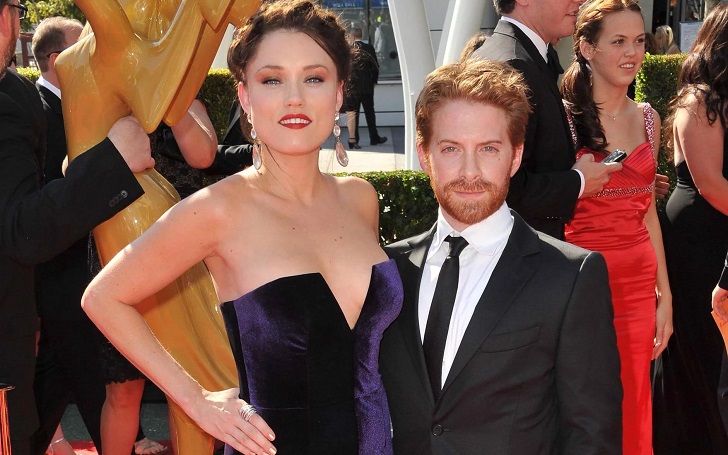 Learn about the incredible married life of Seth Green and his wife, Clare Grant.

The veteran actor Seth Green is mostly occupied with his voice acting job at 'Family Guy,' where he voices the main character 'Chris Griffin.' Amidst his busy schedule, he was able to write and direct his own movie 'Changeland' in 2019.

While Seth Green has had a fantastic acting career in his life, he also leads a happy married life with his wife, Clare Grant. The envying marriage of Seth and Clare is an example of a sustaining marriage for many couples out there. How did the two perfect lovers find each other in this crowded world? Let's delve deeper into the details of the married life of the two actors.

How Did Seth Green and Clare Grant Meet?

First of all, let's learn how the lovebirds met and fell for each other. The couple first bumped into each other in 2007 at their favorite comic book store named 'Golden Apple Comics'. The store was recently reopened, and the actors were participating in the event where Seth was signing autographs, and Clare was taking pictures.

But the couple were not drawn to each other at the first meeting. They got to know each other well only when they again saw each other at the Comic-Con. They found out they both had many things in common; most important of all, both had the same craze for comic books and fast foods. After Seth got Clare's number through a mutual friend, they set up a date. Clare describes the date to People as the thing that was a factor that contributed to their relationship.

Find Out About: Cory Hardrict and Wife Tia Mowry — Details of Their Cherished Married Life and Children

Well, their 'thing' did not just become a beautiful friendship; instead, it blossomed into a lovely relationship.

The Things Then Moved from Casual Dating to Engagement

The couple went on further dates and grew close together. They really connected when they together went on a 'Robot Chicken Skate Party Bus Tour' in 2009, which lasted for two weeks.

Seth and Clare connected on their two-week bus tour.
Source: The Modest Man

Green described the experience as, "That's when I knew that there really couldn't be anybody else for me." Grant also added, "I didn't realize how deep it would go until we really spent time together. It was sad that we got off the bus and had to go back to our everyday lives."

Check Out: Who Is Lennon Parham's Husband? Here's the Complete Detail of Her Married Life

They then fell in love with each other, and Seth was already thinking of taking their bond to the next level. He was working with a jeweler to make a perfect ring for Clare, who was completely unaware of this. Then four months prior to their marriage, Seth surprised her in New Year's Eve in 2009 by getting down on one knee and expressing his love. And obviously, she said yes.

The Blessed Couple Married in 2010

The lovely couple managed everything for the wedding within four months after their engagement and tied the knot on May 1, 2010, in Northern California.

Seth and Clare tied the knot on May 1, 2010, in Northern California.
Source: Pinterest

The wedding with decorations included toy collections, showcasing the two's love for toys. The tables had models of various action figures, and superheroes, and guests absolutely loved it.

Also See: Who Is Diego Tinoco Really Dating? Find Out about His Relationship with Sierra Capri

Since their marriage, they have lived together in Los Angeles. The couple have worked together in 'Robot Chicken,' 'Warren the Ape,' 'Changeland, Holidays,' 'Star Wars: The Clone Wars,' 'Hulk and 'The Agents of S.M.A.S.H.'

Stay tuned to IdolPersona for more relationship-related content of your favorite celebrities.