The Romance Rumor of The Weeknd and Angelina Jolie Caught Fire After a Dinner Date in LA!

Angelina Jolie and The Weeknd were seen having dinner together in LA, and the stars are now suspected of sharing a love bond. They were dining in the Italian restaurant Giorgio Baldi and left after hours.

Both the artists are recently single, and this reason makes fans suspect something might going on between them. Though they spent hours together when they met recently, Weeknd and Angelina left separately to avoid the media.

The Academy Award Winner actress was seen in a black silk dress with a long grey coat and black boots. While the five times Grammy-winning singer was in a black t-shirt and jeans pant and blue jeans jacket.

The Weeknd and Angelina Jolie were spotted on a dinner date.
Photo Source: India News Republic

According to Page Six, the stars were not trying to hide their details. And although many suspected something romantic might be going on between Angelina and Weeknd, credible sources claim the meeting was business-oriented rather than a secret hook-up. The Weeknd will be shortly be seen in the HBO series, The Idol.

The mother of six, Angelina, is currently single; she divorced her beau, Brad Pitt. After the legal divorce process, Angelina is suspected of being in frequent touch with her ex-husband Johnny Lee Miller.

It seems that The Weeknd is also single for now. The singer previously dated some famous personalities like Bella Hadid and Selena Gomez. The musician is rumored to be on a romantic bond with songstress Rosalia, but none of them have spoken in this matter. 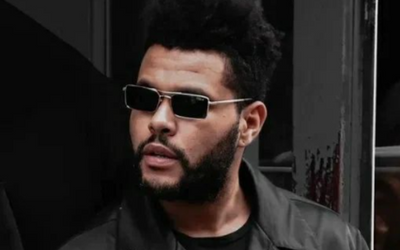