Tom Urie's 18-Stone Weight Loss, How Did He Do It? 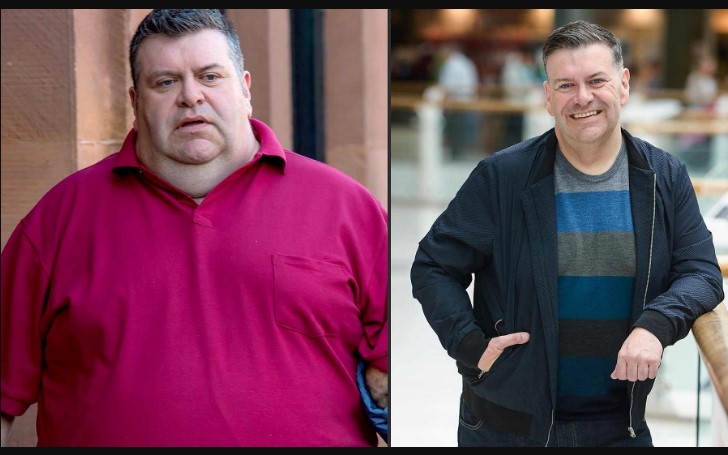 Tom Urie is a Scottish actor and musician who is best known for portraying the role of 'Big Bob (Bob O' Hara) on 'River City.' Moreover, the actor is also known as playing the role of 'Gordie' on BBC Scotland drama 'Guilt.'

Tom started his acting career from the Scottish sketch show, 'Chewin' the Fat,' on which he portrayed various roles within the show. Moreover, the actor also acted as 'Captain Ortego' on 'Snoddy.'

We don't need to stress more about Tom's career, as Scottish fans love him. But recently, the actor is also gaining popularity for his fitness regime, Tom Urie has undergone massive 18 stones weight loss. Let's find out how he did it.

Tom Urie's weight loss journey started from 2015, the actor back then talking with BBC Radio Scotland, revealed his journey started with simple aims to complete a top ten of everyday things that he could not do before.

The actor, back then, said, "For the last 15 years, there was a decline, everything was a struggle. Getting up out of a chair was a struggle, getting in and out of the bath was a struggle, walking anywhere, talking to people because I was out of breath all the time. I was frightened to leave the house because someone might say something."

Tom Urie continued, "There was just a whole big catalog of possible hazards that my brain went through before I could think of doing anything. As well as undergoing surgery, Urie was given medication to help his battles with mental health, which he believes proved crucial in changing his situation."

Also Read: Yo Gotti Weight Loss - How Many Pounds Did He Shed?

How Did Tom Urie Lose Weight?

So, after his struggle with his weight, Tom Urie stressed he needed to find out what was wrong with him and what the problem was. Once that started getting sorted, the other options started coming in.

Tom Urie said, "I was binge eating – junk food, sweeties, gallons of fizzy juice. Just Eat was the curse. I could sit at the computer and click a button and half an hour later, pizza’s at the door. Now I eat organic as much as I can manage. Pollokshields has fruit shops everywhere, I go out and buy what I’m having for my dinner."

Following his massive 18 stones weight loss, the actor felt relief that he "can now go into M&S and buy something." He revealed his struggle for years to order his clothes from a grim website that specializes in enormous sizes.

The actor said, "Everything costs a fortune and you’re walking about in a big black tent all the time."