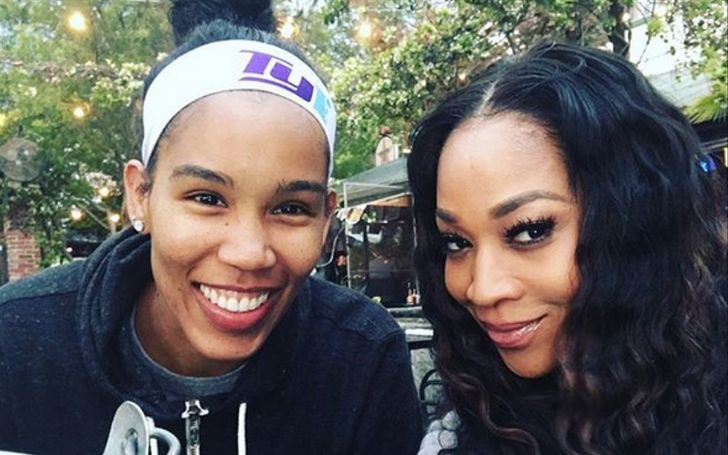 Grab All The Details On Ty Young's Personal Life!!

Tamera "Ty" Young is a former American basketball player who is presently a free agent. The 35-year-old player was selected by the Atlanta Dream with the eighth overall choice in the 2008 WNBA Draft after playing collegiately for James Madison University.

Young was moved to the Chicago Sky in 2015 and led them to the WNBA Finals, before returning to Atlanta and being dealt with by the Aces in 2018. Her estimated net worth is over $5 million.

Is Ty Young And Mimi Faust Still Together?

Ty Young decided to take the next step in her and Mimi Faust's relationship a few months after Season 9 finished and proposed. Faust and Young got engaged in 2020. Mimi captioned an Instagram photo 'Sure!' Everything was OK until the pair called it quits in 2021, claiming that they grew apart.

Ty Young decided to take the next step in her and Mimi Faust's relationship a few months after Season 9 finished and proposed.
Photo Source: Instagram

They resumed their romance in January 2022. Now, the rumor mill is humming with dishonest claims as Ty is seen snuggling up with another participant in a video and cryptic posts by Mimi And Ty.

Ty Young was recently spotted out in LA putting off a serious couples vibe with her old teammate DiJonai Carrington, according to TheJasmineBRAND. Naturally, this sparked outrage on social media, as Ty and Mimi had only recently rekindled their engagement in January 2022. The reality star pair appears to have called it quits once more.

Ty Young was recently spotted out in LA putting off a serious couples vibe with her old teammate DiJonai Carrington.
Photo Source: Instagram

Young responded to the reaction when the news spread on social media. The baller stated in a now-deleted post on The Shade Room that she was not cheating on Mimi because they were no longer an item.

"Things usually happen in silence. But now that we're here, you can't cheat when you're single, and I suppose you can't have friends either " Ty ended her message with a shrug emoji.

According to The Shade Room, Ty and Mimi's split appears to be recent, like the Love & Hip Hop: Atlanta star recently revealed Ty as her #WCW (Woman Crush Wednesday) on Instagram.

Mimi eventually addressed the end of her engagement with Young in her own post-and-deletion, which was captured by the publication. Mimi explained in a lengthy comment that the couple simply grew apart. She also wished Ty well, emphasizing that growing apart is fine, but respect should always be offered.

Based on Mimi's answer, social media people believe she is upset over their relationship ending. Many users also criticized Ty for appearing to dismiss Mimi's feelings.

"In just six days? Ty was already on his way. There's no way, "One user made a comment.

"However, Ty was only her WCW. So, if you simply dumped her, MIMI, WE GET IT. And TY THAT'S KINDA SHAMELESS BECAUSE SHE JUST PROPOSED. I would never accept her back "another user added a comment.

Mimi Faust and Ty Young got engaged for the second time on January 2, 2022.

Ty Young and Mimi Faust appeared to be set on being life partners prior to the turmoil. Mimi, star of VH1 Family Reunion: Love & Hip Hop Edition, and her on-again, off-again partner Ty lately decided to give their romance another chance by getting engaged for the second time.

Ty Young and Mimi Faust appeared to be set on being life partners prior to the turmoil.
Photo Source: Instagram

Mimi turned 50 during the week of January 2, according to The Shade Room. Ty revealed to partygoers that the couple is engaged once more during the festivities. Mimi happily held Ty's hand while showing off her enormous rock in the video.

Click Here To See: Who is Simone Alexandra Johnson? Is she Dating? All Details Here

Social media users and fellow celebrities alike congratulated the newlyweds. "Sometimes you have to grow apart to develop together." "I'm glad for them," one fan said.

"I love that Ty was able to show Mimi why getting married the correct way is worthwhile." "Congratulations to them," another fan said.

The couple has officially broken up for the second time, but some admirers believe that this is not the end of their relationship. Perhaps they're simply working things out and will reignite their passion later.