Home / lifestyle / Who is David Weathers' Wife? Learn About His Family Member Here

Who is David Weathers' Wife? Learn About His Family Member Here

Here You Can Find All The Detail On David Weathers Married Life And His Family Member.

Born on September 25, 1969, David is a retired big-league pitcher who pitched for 19 seasons in the majors with multiple teams, including the Astros, Marlis, and Brewers. He also team-up with Derek Jeter when the Yankees won the 1996 World Series.

Talking about the ex-athlete's wealth, David is a millionaire who accumulated a net worth of nearly $5 million as of 2021. He collected an amount of his fortune from his primary career as a baseball player.

Is David Weathers a Married Man? Who is His Wife In 2021?

No doubt, the former baseball pitcher David Weathers is a married man. He tied the knot with a basketball player Kelli Weathers, who used to play at the Belmont University and was one of the top scorers of that time.

Well! David isn't available on any social media, and on another side, the Kelli Instagram account remains private. So, we couldn't find their married date, but we can say that it has been more than 21 years since they have been together, as per their children.

Read: Tariq Trotter Married Life as of 2021: Find All
Details On His Wife Here

The togetherness of more than two decades is not just a number; David and Kelli as husband and wife, are still tied with each other, which proves the pair's romantic love life is significantly stronger in themselves.

David Weathers is Father To His Three Kids

David Weathers, 51, is a father of three children and brought up with a basketball and baseball champions no doubt that his kids are also interested in the athletic field.

Talking about his son Ryan Weathers, he is a young professional baseball player with jersey number #40. He plays as a pitcher for the San Diego Padres of Major League Baseball (MLB). Indeed, he followed in his dad's footsteps.

Following David's career path, Ryan, 21, is now linked with a significant league baseball stint under the guidance of his family. David, who played in the MLB for 19 years, has monitored every step of his son.

After Ryan, David has got two beautiful young daughters named Karly Weathers and Ally Weathers. As the athlete's parents raised them, both are equally participated game side.

Weather's Family together in a frame.
Photo Source: Twitter

Karly, a 2022 combo guard at the young, is a high-energy basketball player who tries to impact the game in any way possible. Moreover, she also plays volleyball for her high school, leading her to win the state championship her freshman year, as per 247sports.

Ally, as a younger among Weathers family, is also interested in basketball. And as her parents and siblings, she also might build her future wherever she found her career bright very soon.

For more Celebrity relationships and kids' information, stay tuned with us in Idol Persona. 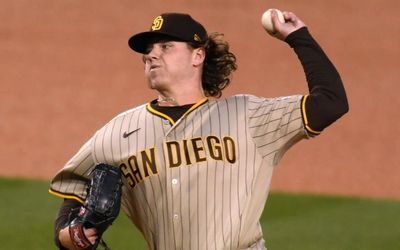 Who is Ryan Weathers' Girlfriend in 2022? Learn The Details Here