Grab All The Details On Will Sharpe And Sophia Di Martino's Relationship History!!

Sophia Marie Di Martino is a well-known English actress who rose to prominence for portraying the role of Sylvie in the television series Loki. She became famous for her appearances in different movies and TV shows.

One of the renowned works of the actress is Flowers, where she played the role of Amy Flowers from 2016 to 2018. 5 feet 7 inches tall actress began her career in the series Holby City in 2004. According to The Artist, Martino enjoys a net worth of $5 million as of 2022.

Black Pond, A Royal Night Out, The Darkest Universe, Click & Collect, Yesterday, and Sweetheart are some of a few films that Martino played in. Furthermore, some of her TV shows and series are Casualty, Peacock, Hitmen, Silent Witness, Eternal Law, and Into The Badlands.

We know very clearly about Sophia's professional life. Now, let us grab more details on her personal life as well.

No, Sophia Di Martino is yet to be married and have a husband. However, that doesn't mean that she is single. She is currently in a delightful relationship with her long-term boyfriend, Will Sharpe.

William Tomomori Fukuda Sharpe, renowned as Will Sharpe, is also involved in the entertainment industry like his girlfriend. Sharpe is also a well-known Japanese-English actor, writer, and director.

Cockroach, The Wrong Door, Sherlock, Sirens, Landscapers, and The House are a few projects that Sharpe has worked on. Martino won MTV Movie & TV Awards for Best Breakthrough Performance and Best Team with Tom Hiddleston and Owen Wilson for the series Loki.

The couple started dating in 2010 and has been going strong since then, as per Hollywood Mask. Their relationship timeline is yet to be discovered as the duo tends to keep their status private.

You May Also Like: Kate Hudson Reveals She Dated Owen Wilson, Get all the details on their Affair

The lovely couple does not show up together in public. However, the duo have a wonderful bond and have worked on many films and projects together, such as Flowers, The Darkest Universe, Black Pond, and The Electrical Life of Louis Wain.

Sophia Di Martino is not wedded to Will Sharpe. However, the couple shares two children. Martino's first pregnancy was not disclosed as the couple doesn't like to share much about their personal information.

According to Glamour Buff, the stunning duo welcomed their first child into the world in November 2019, who is a daughter. The actress did not share any details regarding her pregnancy except on June 14, 2021, in the Marvel studio's gym.

In the picture, the actress captioned it was taken in February 2020. The actress further described that the picture was after her four months postpartum. Besides, she has not yet revealed her child's face or any information regarding her daughter.

Related: Who Are Owen Wilson's Brothers? Find It Out Here

During the premiere of Martino's movie Sweetheart on September 14, 2021, the actress revealed that she was pregnant with a second child. At this time, she decided to flaunt her baby bump on the red carpet instead of keeping it a secret.

The 38-years-old actress also uploaded her maternity photoshoot on her Instagram. The actress welcomed her second child into her family, a son, in November 2021. Martino is seen posting some pictures on her Instagram. But she chooses not to reveal the identity of her child, and an emoji hide her kid's face.

Click To Know: Is Chace Crawford Married? Who is his Wife? All Details here

The actress revealed she was nine months pregnant when the Marvels approached her to work on the project. Moreover, she also revealed how Tom Hiddleston took care of her. 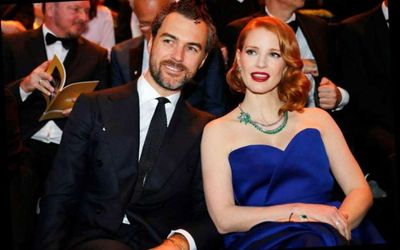