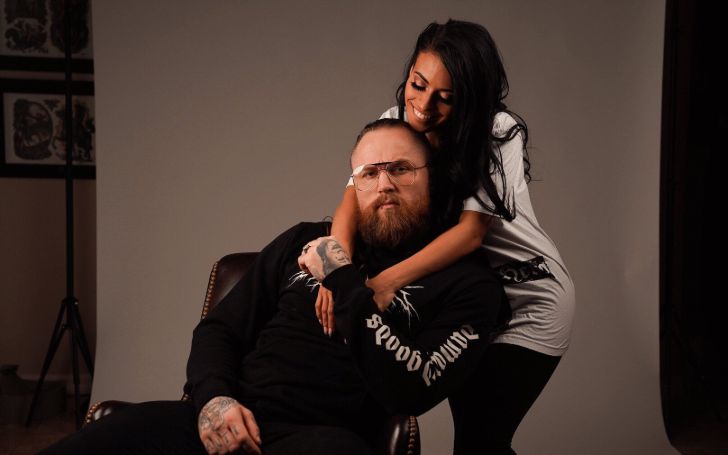 Scroll Below To Find Out The Relationship And Marriage Details of Zelina Vega and Aleister Black!

Zelina Vega is a WWE diva who now works for WWE RAW. She is ruthless in her wrestling style and makes no apologies for her tactics. Years ago, Vega and Andrade formed a formidable partnership in Mexico. They recreated the team in WWE NXT, where Vega finally put an end to a losing streak that was threatening Andrade's professional future.

Zega has competed in many high-profile events in the WWE throughout the years, including the Women's Royal Rumble Match and battles with former Raw Women's Champion Asuka.

Following Vega's absence from WWE for several months, WWE Official Sonya Deville surprised everyone by announcing her comeback to the ring and told her participation in the Money in the Bank Ladder Match.

WWE superstars Zelina Vega and Aleister Black are masters of secrecy. It's why, before marrying in 2018, they managed to keep their whole relationship under wraps, startling the entire wrestling community.

Zelina has been working with one of her husband's worst enemies to make matters even more intriguing, but this hasn't stopped their budding romance.

It's unclear when they originally met; however, they were first seen together on screen in 2018 at NXT TakeOver New Orleans, where Zelina's client Andrade "Cien" Almas faced Aleister.

It was revealed in December of 2018 that the two tied the knot, but it was unclear when and where it took place. The news stunned the wrestling world, especially considering that the fans had no idea when they started seeing each other. However, based on the photographs, it appears like the couple had a modest and intimate ceremony officiated by their friend David Herro.

The couple also started their YouTube account in March of 2020, and now that they're both in quarantine, they've had plenty of time to share entertaining videos.

They've already shared several videos, varying from Zelina's makeup demonstrations to the couple's daily activities. Through their YouTube channel, fans are able to watch the relationship from the inside and the day-to-day activities of the couple.

When Austin Aries made his Ring of Honor debut in 2015, the professional wrestler, Vega, collaborated with her. It's unknown when their friendship turned into a romantic relationship, but it terminated in 2018.

Fans didn't seem to like the news and continued to ship them together. However, when a fan tweeted Zelina about it, she explained that they were no longer together.

In response to a fan's since-deleted tweet, Zelina said:

I'm going to say it once and for all: we're not together and haven't been for a long time. We were never married or engaged in any way. I've moved on and don't want to be affiliated with him any more.

Check Out: What is Ben Volavola Relationship Status in 2021