Home / lifestyle / Who is Rinat Brodach? Details About her Design

Learn All The Details On Rinat Brodach!!

Rinat Brodach is a New York-based Israeli-American fashion designer. She appeared in the first season of Making the Cut. Brodach won the fifth episode on streetwear, which resulted in a partnership with Puma and selling her clothing on Amazon.

During the sixth episode, Brodach was eliminated. She dressed Billy Porter for the 24th Critics' Choice Awards. Rinat was a finalist in the Fashion Group International All Category in 2020.

Rinat Shayna Brodach, aka Rinat Brodach, was born in 1984 in the Israeli city of Beer Sheva. She knew she wanted to be a fashion designer from a young age. Her fascination with the draping and movement of fabric led her to pursue a career in fashion.

Brodach used fashion as a form of expression as a child and continues to do so today. She moved to San Franciso in 2005 to attend the Academy of Art University after serving in the Israeli Air Force and gaining a stronger sense of self and direction.

Rinat graduated with a BFA in Fashion Design from there. Her thesis collection was recognized with a year-long scholarship in Paris during her senior year. She moved to Paris in 2010 to study at The Chambre Syndicale de la Couture Parisienne.

Click Here To See: Is Sharife Cooper Dating Anyone in 2021? If Yes, Who is His Girlfriend?

Rinat's work was published in Emerging Fashion Designers 2 by Sally Congdon-Martin the same year. She stayed in Paris for another year, working at Steffie Christiaens' fashion house, among others, before returning to the United States in 2012, settling in New York to launch her brand.

Brodach extensive knowledge and training influence her work in draping, which allows the woman beneath the garment to stand out and draw us in a while effortlessly and selectively. Thus, enhancing a woman's figure with designs that capture a gentle interplay between androgyny and sensuality.

As per Nolcha Shows, Rinat Brodach's vision is: "My clothes are designed to give women access to their true power, to inspire them to lead from the heart and to bring out their inner sensuality while giving them a sense of confidence and security."

Rinat Brodach was born in 1984 in the Israeli city of Beer Sheva.
Photo Source: Instagram

Further, Brodach adds, "Through my clothing, I express who I am and how I feel. We are all individuals, and each garment tells my personal story, making it one-of-a-kind. Draping allows me to tell a story." 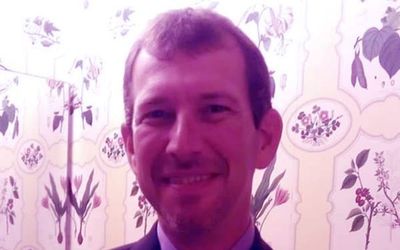 Who is Sander Bos? Is he still Single? Who is he dating Currently?