American actor Cory Hardrict has been a long-time servant in the entertainment industry as one of the most versatile prospects. Here are some intriguing facts about him.

There is no doubt that Cory Hardrict is one of the talented actors in Hollywood. He featured in some hit shows such as 'S.W.A.T', 'CSI: Miami' and 'ER'. Similarly, the Illinois-born artist is best known for his role in 'Car Dogs', a car dealership movie.

Hardrict enjoys a lavish lifestyle, thanks to his $3 million net worth. Ever since he made his debut in 1998, he burnt the midnight oil to settle down in it with a series of recurring roles before finally making it big. So, without wasting much time, let's talk about some of his exciting facts.

5. Hardrict: A Producer As Well

While Cory Hardrict built his career and reputation as an actor, with around 50 television and movie credits combined, most of his fans are unaware about his production works. Although, he started his journey in 1998, he couldn't move onto production until he was settled as an actor and earned some resources.

By 2012, Hardrict was already a millionaire, thanks to his immense hard work for so many years. Thus, he decided to expand his resume by becoming the executive producer for a science-fiction film, 'The Watch.' In production, he worked alongside Shawn Levy in the movie which starred Ben Stiller and Vince Vaughn.

Despite big expectations, Cory and company couldn't achieve much success from the movie. Since the movie was made with a budget of a staggering $68 million, it managed to collect only $68.3 million in the box office, which was quite a shame.

It is indeed a big deal when actors get married, and even bigger when they tie the knot with another actor. Cory Hardrict shared the same case since he exchanged vows with Disney star, Tia Mowry on April 20, 2008 in Santa Barbara, California. Interestingly, the power couple dated for two years before getting engaged on an auspicious day of Christmas 2006.

The pair celebrate their 12th marriage anniversary in April 2020. Mowry, popular among the 1990s kids revealed how the two divide the roles and responsibilities in their marriage to keep them ticking and happy.

Chicago-born actor Cory Hardrict is fortunate to have a blissful family life alongside a resounding career. Being married to his long-time girlfriend, Tia Mowry, the couple welcomed two adorable children into their lives to create a family.

Hardrict became a father for the first time to daughter Cairo Tiahna Hardrict in 2011. Surprisingly, his wife, Mowry teased for the pregnancy in her reality show, 'Tia & Tamera', earlier on. Similarly, they gave birth to their second child, this time a daughter, Cree Hardrict in 2018.

Also See: Tia Mowry Net Worth — How Much Solo Fortune Does She Have?

The little family of four seems complete now and with two millionaires as parents, they sure have a bright future ahead. Hardrict often helps his wife when it comes to making her little daughter sleep or other chores in order to remain happy.

2. Cory Hardrict Used to Be Broke

The ones who know Cory Hardrict on the screen, living a glamorous life would be surprised to know that he was poor before. Back in the early 2000s, he wasn't used to riding fancy vehicles or living in big mansions.

Cory Hardrict was given a ride by his wife Tia Mowry when they first met.
Photo Source: Cory Hardrict Instagram

There was a quite funny story on how Hardrict first met his wife, Tia Mowry. The actor, not a millionaire back then was waiting for a bus, while his beau saw him and offered him a ride. Thus, if there is one thing that Hardrict leaves, it is an inspiration for all the dreamers out there, with a message that nothing is impossible since, today he has a name tag of a multi-millionaire.

Cory Hardrict always dreamt of being an actor. And, he was fortunate to be assisted by his booking coach, Amy Lyndon, in his early phases of life.

Lyndon, who is considered one of the top stars, who also featured on 'NCIS' and 'Days of Our Lives', was also awarded as a best director once. Besides, a filmmaker, she is also a celebrity booking coach and a book author. 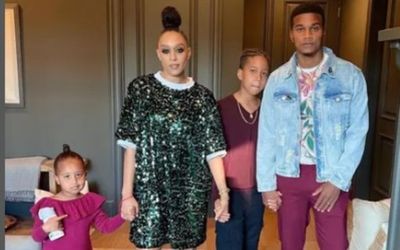