How Rich is Leah McSweeney in 2021? What is Her Net Worth?

Learn All The Details Of Leah McSweeney's Net Worth Here!

American fashion designer Leah McSweeney is the founder and CEO of Married to the Mob, a clothing brand. In addition, she has also starred in the reality television series The Real Housewives of New York City, which helped her garner massive popularity.

Born on August 27, 1982, Leah Christine McSweeney was born in Manhattan to Bryan McSweeney and Bunny McSweeney. She was raised in an Irish-Italian family with her two siblings, one sister named Sarah McSweeney and a brother named Daniel McSweeney. She is a mother to her daughter Kier Marie.

Though Leah's academic performance was poor, she hustled pretty enough in the real world, and due to her hard work, she is doing well financially. Many people are a fan of her and want to be successful like her in the future. People are interested to know how much does the fashion designer earns through her career as a businesswoman. Below we have gathered some information regarding it.

Leah McSweeney is a Millionaire

If someone is hardworking and focused on their goal, nothing is impossible; that is exactly what happened to Leah McSweeney. She gave her all to her business, and now she is thriving both professionally and financially. So, what is her net worth as of 2021?

According to Nicki Swift, the ROHNY star McSweeney is a self-made millionaire whose net worth is estimated to be $3.5 million. She made most of her fortune through her clothing brand, Married to the Mob.

Leah McSweeney's net worth is estimated to be $3.5 million.
Photo Source: Instagram

As already mentioned, the 38-year-old reality star makes much of her income through her clothing line. However, aside from her company, McSweeney earns significant pay as a rookie on RHONY. Reliable sources claim she makes $10 thousand per episode.

Related: What is Jimmy Carter's Net Worth in 2021? Here's All The Breakdown

According to Bravo, the RHONY cast McSweeney recently upgraded her apartment. By the looks of her flat, it seems she has done quite an expense on it.

Besides keeping herself busy with her modeling and business, McSweeney also loves spending her time with her pets. She owns two dogs named Ruby Esther and Angel Marie.

Leah McSweeney launched her clothing brand with an initial investment of just $75 thousand. Her brand is focused on women's athleisure and street style trends, which helps ladies freely express themselves through their appearances.

Married to the Mob, collaborated with many brands like KAWS, MCM, Nike, Reebok, Alife, and Colette, which helped make a massive name for itself. In addition, celebrities like Fergie and Lady Gaga have also been wearing clothes from McSweeney's brand.

Besides her company, she also earns money by contributing to Mass Appeal and Penthouse magazine as a regular advice columnist. Similarly, she is with Hypebeast- an online publication where she writes about her life as a mother, a clothing line founder, and a clothing line and style. Moreover, she also continues to advocate for female empowerment, street culture, and creative entrepreneurship.

Leah McSweeney votes for mental health awareness because she has bipolar disorder, so she decided to raise awareness to people going through the same. She also offers commentary about health, motherhood, styles in an online publication called Hypebeast.

Leah McSweeney is the cast of the popular series The Real Housewives of New York City.
Photo Source: Instagram

McSweeney even went to a podcast called improper etiquette, where she talks about current affairs, interviews. Many people like the podcast and want to hear more from her.

Besides all this, Leah made appearances on several television shows like Millionaire matchmaker and a cameo in love & hip hop: New York before doing the Real Housewives of New York City series. 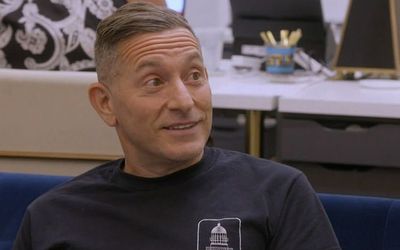 Rob Cristofaro's Net Worth and Earnings in 2021