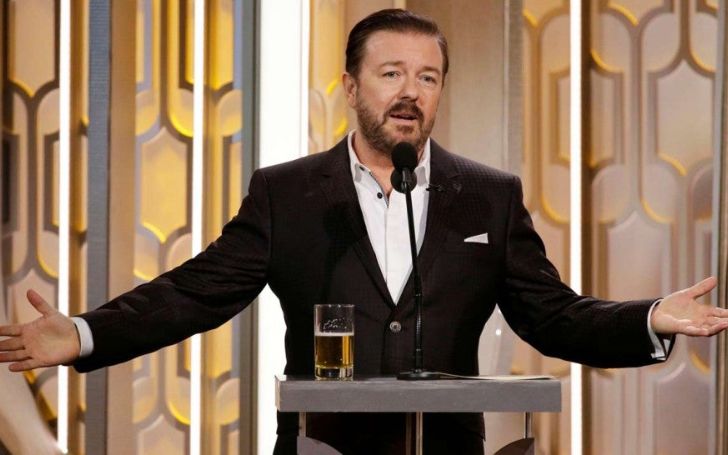 Here are all the details of Hollywood's most savage comedian, Ricky Gervais!

Ricky Gervais might be the most feared name in the Hollywood community because of his savage comments and jokes. There are rumors some celebrities even miss out on award ceremonies so that they don't fall victim to his savagery. One thing is for sure though, Ricky Gervais is at the pinnacle of his comedic Hollywood journey.

Gervais is a gifted man when it comes to expressive arts and is also a master of resilience to overcome setbacks. The life of the party does bring out his inner beast of crushing blows, especially during the Golden Globes Awards. The frequent host of the award show left nothing to chance in the 77th Golden Globes Awards; from calling his own employers 'The Hollywood Foreign Press' extremely racist to referring 'Two Popes' as a pedophile movie, the comedian said it all.

Not a lot many people have the balls to host an award show and tell their audience to shut up, but it's a walk in the park for the 58 years old actor. However, Ricky's career isn't just limited to being an actor. With almost as many writing credits as his acting credit, Gervais is truly a gem in the industry. Not only that, but Gervais also holds numerous production, direction, soundtrack, and composition credit. With such many glorious credits, how much did Ricky Gervais make from his career? What is his net worth?

With so many accolades and accomplishments, it wouldn't be surprising to know that Ricky Gervais's net worth is estimated to be an astounding $140 million, as noted by Wealthy Gorilla.

Ricky Gervais's net worth is estimated to be an astounding $140 million.
Source: Instagram

Although Gervais is yet to give out any information regarding his fortune, it is quite evident the actor's 'bands of greens' are the product of his lifelong entertainment career. His latest venture is the 'Afterlife' series in which he played the character of 'Tony.'

Gervais even mentioned the 2019 series in his opening monologue of the 77th Golden Globes Award, saying that watching the series would be a better option than the three hours long and tedious award shows.

Ricky, currently in a relationship with Jane Fallon, amassed almost all of his wealth through his performance career. But the comedian started as a writer for the 1998 TV series 'The 11 O'Clock Show.'

The following year Ricky began appearing as various characters throughout 'The Jim Tavare Show.' After a long run in many TV series and voicing 'Bugsy' in the 2005 movie 'Valient,' the actor received his first significant movie role in 2006. He portrayed the character of 'Martin Gibb' in 'For Your Consideration.'

Watch: Battle of Humor (night at the museum)

What turned Ricky's career around was the original show co-written and co-directed by Gervais himself in 2001. The British mockumentary sitcom 'The Office' also starred Ricky himself as 'David Brent.' For his works in the show, Gervais won numerous BAFTA awards.

The American adaptation of the show, starring Steve Carell, was released in 2005. The 2005 adaptation was so well received that it lasted for nine seasons.

The Afterlife actor, Ricky added a $14.15 million mansion located in North London to the list of his assets back in 2016.

Gervais shares the mansion with his long-time partner Jane Fallon. Despite spending 37 years together since 1984, the pair have opted not to make it official. The moments captured by a photographer of the duo moving into their massive mansion showed tons of workout equipment.

Regardless of the comedian's heartbreaking insults and his level of savagery, the world only seems to want more from Ricky Gervais. The actor is already packed till 2021 with three different animated movies featuring Gervais's voice under production.