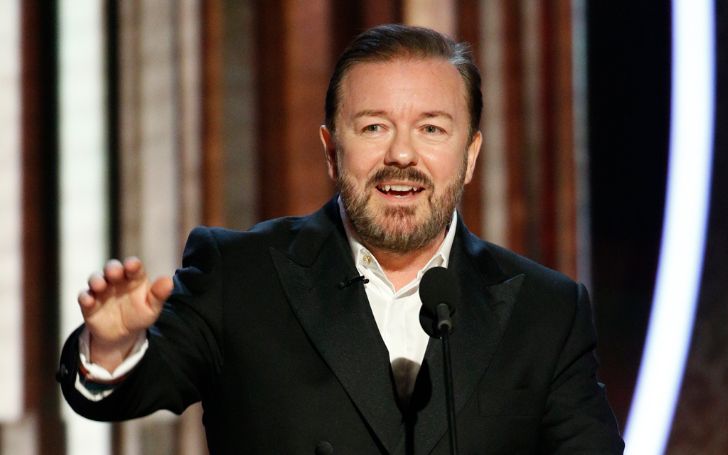 And welcome to the 77th annual golden globes awards; you're all getting roasted!

If Ricky Gervais's jokes were anymore brutal, his name would probably appear if you googled the word, Savage. You know, like how Donald Trump's face comes up when you type in the phrase Idiot in the Google search query.

Ricky Gervais is savage; that's not news. I mean, the guy is so savage that he probably popped out of his mother, waving a middle finger up in the air. His savagery especially peaks when he hosts Golden Globes Awards, where he doesn't care about anything he says. The 77th Golden Globes was no different. None survived Ricky's monologue. So this one is for Ricky Gervais and his Top 8 savage moments.

I don't care anymore. Just joking. I NEVER DID!

Right off the bat, Ricky - who is currently in a long term relationship - went on to express how he didn't care about the jokes he made while hosting the Golden Globes Awards anymore.

He also revealed that it was the last time he'd be hosting the Golden Globes.

Shut Up! I Know He's Your Friend But I Don't Care!

Ricky made a Jeffrey Epstein joke in his 77th Golden Globes Awards monologue.

Ricky cunningly connected the punchline to Season 2 of the Afterlife. He said, "In the end, he obviously didn't kill himself. Just like Jeffrey Epstein."

License Plate Made By Felicity Huffman

Gervais, who boasts an incredible net worth, began this one saying that he also attended the January 5th event in a limo. This in itself isn't a joke, but then he mentioned Felicity Huffman.

Also See: Apple TV Plus Fails to Make its Mark at Their First Golden Globes

Ricky pointed out the Felicity Huffman scandal by joking about a license plate made by Felicity Huffman and said that he felt worse for Huffman's daughter. He also added this might probably be the most embarrassing moment in Felicity's daughter's life, even though her father appeared in 'Wild Hogs.'

The Hollywood Foreign Press Are All Very, Very Racist

Ricky stated that many talented people of color were snubbed, and there was nothing that could be done because The Hollywood Foreign Press was extremely racist.

Ricky was a loose canon in the 77th Golden Globe, and he didn't spare Leonardo DiCaprio either.

DiCaprio seemed quite impressed with Ricky's joke about how his date had gotten too old for him by the end of the 'Once Upon a Time in Hollywood' premiere.

Changed But Not as Much as Bruce Jenner

When Bruce Jenner got a complete sex reassignment surgery and became Caitlyn Jenner, Ricky couldn't steer away. So yeah, he brought up Caitlyn Jenner in his monologue too. He started by calling Caitlyn an inspiration all over the world for transgender people.

Only later did Ricky said Caitlyn, didn't do much for women drivers all around the world.

Ricky Gervais Took His Emmy Back From Steve Carell

Ricky Gervais won a Primetime Emmy Award in 2007, but because of his absence, Steve Carell received the award on his behalf. Steve Carell, however, kept the award to himself and didn't give it to Ricky.

So, naturally, Steve returned the next year to get it back. And yes, it was hilarious.

Ricky uses this joke very frequently, almost in every award show. He always urges the winners to keep their acceptance speeches short.

In Ricky's words from his 77th Golden Globe Awards hosting,

Come up. Accept your little award. Thank your agent and your god. And F**k off. Alright!

Gervais repeatedly mentioned about the three hours long award show being an annoying waste of time. He also begged the winner not to make the platform a opportunity to present on any political issues because some of them, as Ricky said, spent less time in school than Greta Thunberg.

Despite Ricky Gervais's such bitter insults, he never faced many downfalls during his career. Everybody seems to want more from Ricky as he is welcomed to host shows over and over again.

For more news about the Hollywood industry, head on over to Idol Persona.