Grab all the details on the net worth of the American politician and 2020 vice-presidential candidate Kamala Harris.

Last Wednesday's vice presidential debate saw the two candidates Kamala Harris and Mike Pence, argue over the topic of the coronavirus pandemic. The debate was the only one ahead of the 2020 presidential election next month, and they made the coronavirus the focal point of their debate, evident how the current situation has made the issue more relevant than ever.

Democratic party contender Kamala Harris labeled President Donald Trump's coronavirus approach 'the greatest failure of any presidential administration in history.' In opposition, the Republican Vice President Mike Pence said the Democratic Party's pandemic plan amounted to 'plagiarism.' Both are running for the presidential candidates Joe Biden and Donald Trump, who are vying for the White House on November 3.

If Joe Biden wins the election, Kamala Harris is going to make history by becoming the first female vice president. Having worked in several prominent positions throughout the years, the former prosecutor has come a long way in her political career. Below, we take a look at her net worth and learn how much money she's made over the years.

What is Kamala Harris' Net Worth?

According to a wealth-breakdown report by Forbes, Kamala Harris holds an estimated net worth of about $6 million at present. The report pointed out that the vice-presidential candidate shares this amount of net worth with her husband, Douglas Emhoff. Throughout her adult life, Kamala worked as an attorney and a US Senator, the earnings from which are the sources of her incredible fortune.

Kamala Harris holds an estimated net worth of about $6 million at present.
Source: Las Vegas Review

Kamala Harris began her career soon after her graduation from UC Hastings College of Law in 1989, a job in the Alameda County district attorney's office. She worked there for nine years before she switched jobs to work at the San Francisco district attorney's office. During her time there, she reportedly bought a condo for about $300,000 in the city's SoMa neighborhood, which is now worth $900,000.

In 2003, Kamala Harris got elected as district attorney of San Francisco, and according to her tax returns, she earned more than $140,000 that year. The job also made her worth about $250,000 today. She later ran for the position of California attorney general and won, which made her first black woman to hold such a position.

Kamala Harris married the public relations consultant and fellow attorney Douglas Emhoff in 2014. At the time, Douglas was working as an entertainment litigator for the Venable firm in Los Angeles. Currently, he is a partner at DLA Piper Law Firm. The marriage meant the two shared their wealth with each other. It is reported that the couple made about $8.2 million over the course of the last five years.

Also See: Charles Haeger Net Worth - How Rich was the Former Dodgers Pitcher?

When Kamala Harris and Douglas Emhoff filed taxes jointly in 2014, they reported combined earnings of $1.3 million, which was considerably more than $129,000 Harris made on her own the previous year. When Kamala filed a financial disclosure form with the federal government while running for the US Senate, the report read her and her husband's net worth between $1.5 million and $4 million. In the 2019 disclosure form, the two reported assets worth$2.5 million to $6 million and roughly $3 million worth of liabilities, mostly in the form of mortgages.

Kamala Harris Also Made Some Significant Earnings From Her Books

Kamala Harris is also a best-selling author, with a total of $556,000 earnings from her three books: 'Smart on Crime: A Career Prosecutor's Plan to Make Us Safer,' 'The Truths We Hold: An American Journey,' and a children's picture book called 'Superheroes Are Everywhere.' The amount was the advance payment she received from publisher Penguin Random House.

Kamala Harris has made $556,000 so far from her books.
Source: Wall Street Journal

Kamala Harris' memoir 'The Truths We Hold' published in 2019, sold more than 50,000 copies, according to the book sales tracking firm NPD Bookscan. According to her tax returns, she made $320,125 from writing the book.

Check Out: Edison Cavani Net Worth - The Complete Breakdown

Kamala Harris and her husband, Douglas Emhoff, live in a single-family home in Brentwood, Los Angeles. The couple bought the property in 2012 for $2.7 million and is currently worth an estimated $5.4 million. The house, reportedly built in 1948, contains four bedrooms and four-and-a-half bathrooms.

Kamala Harris and her husband bought a house in Brentwood in 2012.
Source: Spotlight Nepal

According to Business Insider, when Kamala Harris joined the US Senate in 2017, she reported in her financial disclosure that she bought a two-bedroom condo for $1.7 million.

Find Out About: Jalen Ramsey Net Worth - The Complete Breakdown 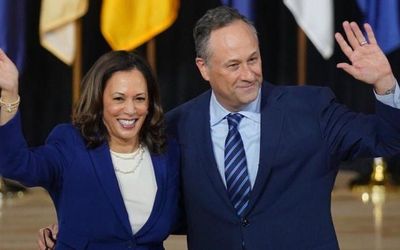