Breaking Bad stars Bryan Cranston and Aaron Paul are excited to revive their characters in the final season of the spin-off series 'Better Call Saul,' suggesting they're eager to return to the world Vince Gilligan built and would do so "in a heartbeat."

The spin-off show is now centered around the events four years prior to Walt adopting the "Heisenberg" persona following a bleak cancer diagnosis, and six years before the sequel film 'El Camino: A Breaking Bad Story.'

When asked about El Camino during an Instagram live stream, Aaron Paul said: "No, I think that was it. I think El Camino was the sendoff of Pinkman. There may be another Breaking Bad story, who knows?"

When Cranston joined in the livestream and asked Paul if he's heard of a follow up, the Jesse Pinkman star responded: "No, I'm just saying. There's a Breaking Bad Universe out there."

Paul added, "There's Breaking Bad, there's Better Call Saul, there's El Camino. You know, who knows? Could there be another story within that universe? Yeah, absolutely. Do I know that's gonna happen? No. Should it happen? I mean, I don't know."

You Might Like: Vince Gilligan Admits Peter Gould Should Receive All the Credit for ‘Better Call Saul’

In Better Call Saul season 5, the criminal lawyer got caught up in Gus Fring's (Giancarlo Esposito) conflict against the Salamanca clan, both of whom were heavily influential on Breaking Bad.

Cranston said, "We always get asked about Better Call Saul and whether Jesse or Walt are gonna show up on that show. I don't know how many times we've gotta tell Vince we're ready to do it. I just don't think he loves us anymore."

Once Paul suggested Gilligan didn't want them in the series, Cranston interjected, "No, that's pretty clear." After Walt died in the closing act of Breaking Bad, a flashback sequence set during the Season 2 events prompted Cranston to feature briefly in the Gilligan-directed El Camino.

Paul, a "huge fan" of Better Call Saul, acknowledges it's tough for the duo to star in the show co-created by Gilligan and Peter Gould since the new spin-off story is set about four years before Goodman is recruited by Walt and Jesse in 2008.

"You know at least where Jesse went [in El Camino]. I don't see how these characters could show up," Paul said. "We'll see, who knows, we'll see. But if Vince knocked on either of our doors, of course we'd show up in a heartbeat."

Cranston added, Added Cranston, "No, I would say, 'What the hell are you doing here? We're quarantined. Don't knock on my door!'" 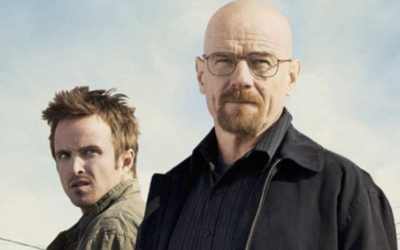