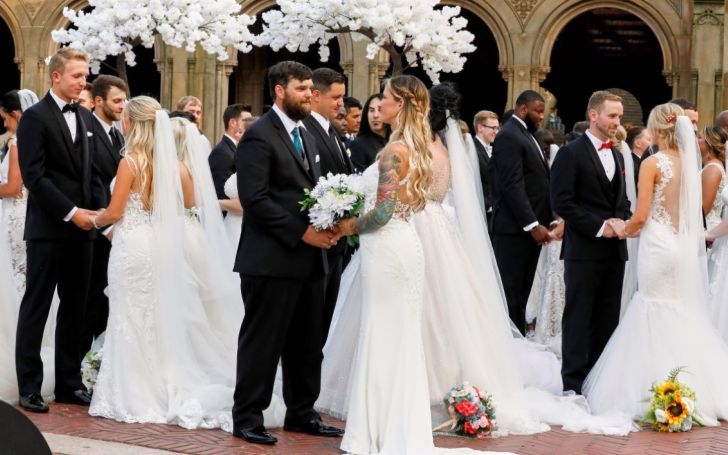 Here all that you need to know about the reality series Say Yes to the Dress America!

The American reality show 'Say Yes to the Dress' first premiered back on October 12, 2007, and since then, numerous seasons of the series made it to the screen. Ever since the beginning of the series, it followed the events at 'Kleinfeld Bridal' in Manhattan as the employers of the bridal shop helped soon to be brides find their perfect dresses to walk the aisle on.

If you follow the series and you're a big fan, then there's a piece of good news for you. The series is back with a new season, possibly the most epic version yet. The new show is bringing 52 couples together, each from 50 different states of United States. The pairs will participate in a mass wedding ceremony officiated by TLC's bridal expert and host Randy Fenoli.

Say Yes to the Dress America

The new show 'Say Yes to the Dress America' premiered on January 7, 2020. Just like its predecessors, the central theme of the show remains the same, to dress up brides for their big day. The only difference, one that makes this one more monumental, is that there aren't just one or two brides. The show is taking on the humongous challenge of donning 52 different soon to be wives.

Watch: Exclusive Trailer of 'Say Yes to the Dress America'

Talking about the show, Fenoli revealed,

The biggest concern was that with so many pairs to be featured, the show could've potentially lost the personal touch as it portrayed in its previous appearances.

Each woman from different states of America, with two more Washington, D.C., and Puerto Rico making 52, were wedded on the same day at the same place. Despite the enormous number, Fenoli expressed that the show managed to get that personal touch for each one of the brides.

52 couple got married in a mass wedding planned by the new 'Say Yes to the Dress America' series.
Source: USA Today

Randy said in an interview with Parade,

I will be really honest with you that that was one of my biggest concerns from the very beginning. I wanted to make sure that every single couple felt like they were the only ones getting married and it was all about them. I think we did a really, really, really great job at that. Every single one of them walked away just feeling like they had the most magnificent time of their life.

'Say Yes to the Dress America' sure did shake things up taking on such colossal summons.

Building up to its premiere, TLC released a video back on November 6, 2019, featuring some of the beautiful ladies who are sure to be the focus throughout the show.

The 'behind the scenes' video presented ten gorgeous females who seemed very excited for their big day.

Watch: Meet the Brides | Say Yes to the Dress America

The Wedding Gift From TLC

TLC surprised the 52 couples with an extraordinary wedding gift. Each pair received an all-expenses-paid trip to New York City and a magnificent wedding gown from the world-famous salon, Kleinfeld Bridal. The dresses were selected by the experts associated with the Kleinfeld to match up with the ladies so that they looked stunning.

TLC, going one more step forward, also paid for a pre-wedding reception and the total expenses of the whole group wedding.

With such significant expenses and plots, TLC's Say Yes to the Dress America sure did step it up to the next level.

For more articles on TV Series, head on over at Idol Persona.

Complete Guide to TLC's 'Dragnificent!' When Will It Air?