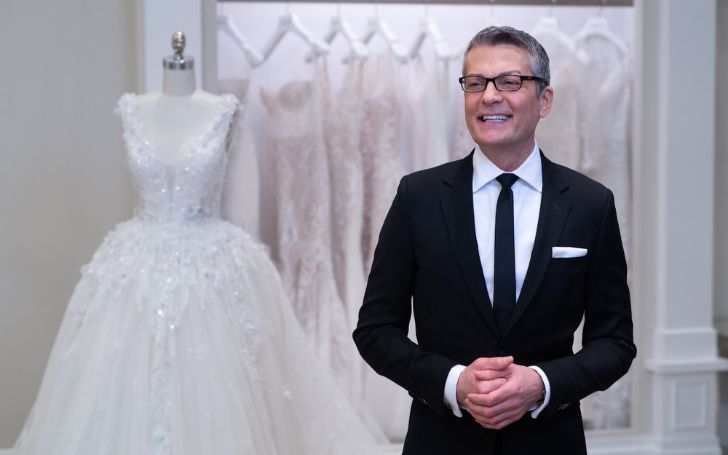 Here are the top five facts about TLC's 'Say Yes to the Dress America' Host Randy Fenoli to help you know him better!

Very few brides are decisive about the dress they will walk down the aisle on, and even fewer can immediately tell what will look the best on them. Among those fewer people is Randy Fenoli, the guy who dresses soon-to-be brides better than a lot of other people.

Born January 30, 1964, Randy is the long-time host of TLC's American reality TV series 'Say Yes to the Dress.' The latest season of the show took on their biggest challenge yet years and joined 52 pairs into holy matrimony in a mass wedding ceremony hosted and officiated by Randy Fenoli himself.

Randy Fenoli officiated marriage of 52 pairs in the mass wedding hosted by 'Say Yes to the Dress America.'
Source: TLC

The 55 years old native of Mount Vernon, Illinois, United States, isn't just a TV personality. The man who knows how to dress is also a fashion designer himself. There's a lot to know about the man, so here are five facts to help you understand him better.

It turns out Randy's perfect sewing and makeup skills are something that he perfected a long time ago before he became a TV guy. Back in 1990, when Fenoli was 26 years old, he won the Miss Gay America pageant. He got up on the stage as 'Brandi Alexander.'

The 'Say Yes to the Dress America' host confessed that the pageant helped him understand what it felt like to transform into the bride, the feeling that has undoubtedly helped his career.

Fenoli Had a Troublesome Childhood

Randy's childhood wasn't very forgiving to him. During an interview with IrieDiva, Fenoli revealed,

I was born and raised on a farm, my father was pretty abusive, and I prayed my whole life to get away from him and get off that farm.

The multimillonaire Randy Fenoli also said that his complicated past gave him perspective and taught him how to interact with his fans. Randy has never been the one to turn his back on his supporters.

When Randy was just nine years old, his mother brought home a sewing machine and supplied planning to make her clothing. Fenoli's mom soon realized that she was just not cut out for sewing and left for work the next day but not before warning Randy not to touch the supplies. Unable to resist the temptation, Feloni ended up making a dress for his mother that she wore to work the next day.

In an interview with People South Africa, Randy described,

When I was 9 years old, my mother came home with a new sewing machine, good scissors, and some patterns with the intentions to make her own clothes. However, she soon discovered that she could not sew a hem in a terry cloth towel. She left for work the next day, but not before telling me that I was not to touch her sewing machine or good scissors. But after she left I looked through the patterns she had brought home and found a McCall's pattern with "That Girl" Marlo Thomas on the front. At the time I had a huge crush on Marlo Thomas. I set up everything on our dining room table and proceeded to make the dress from the pattern.

Not only did Feloni's mother wear the dress to work, but she also brought back another pattern and asked Randy if he could make a skirt for her.

Unfazed of his true passion for Fashion, Fenoli went on to graduate from the Fashion Institute of Technology in New York City.

The FIT alumnus shared in his commencement address on 2015,

When I started off at FIT I was very, very focused on what I wanted to do. I was that student that you hated, the one that stayed up all night.

The graduation from FIT proved to be so valuable that Randy immediately landed a dream job designing for Paul Diamond right out of college.

Randy Fenoli's fans have a piece of great news headed their way. The 'Say Yes to the Dress' star is getting back into the designing game with his Randy Fenoli Bridal collection. Randy aims to provide unique bridal wears with beautiful fabrics, great laces, impeccable embroidery/beading, and fantastic fit within the affordable price of $1500 to $3500. With a broad appeal vision, he hopes every dress to be different from one another.

I wanted every dress to be different, to speak to a different bride, whether she's romantic, fashion-forward, sexy, bohemian, whether she wants to be Grace Kelly or Audrey Hepburn or Cinderella, whether she's having a garden wedding or a beach wedding.

Randy Fenoli Bridal promises all the features with a 12-week delivery date.

Randy Fenoli might've had a turbulent childhood, but he sure did make it big in his career. Fenoli is an overachiever, excelling at everything that he does and shows no sign of stopping anytime soon.

Complete Guide to TLC's 'Dragnificent!' When Will It Air?