Ozzy Osbourne Net Worth - All the Facts About His Wealth

Here are all the details about Ozzy Osbourne's net worth!

If you call yourself a metalhead but don't know who Ozzy Osbourne is, then you're not a metalhead. 'The Prince of Darkness' from the seventies era is now the 'Godfather of Heavy Metal' as the singer slowly slips into his golden years. Regardless of his battle with Parkinson's diagnosis, the legendary metal star pledged to go on tours that were postponed. This only goes on to show how dedicated the 71-year-old is to his passion.

Born John Michael "Ozzy" Osbourne on December 3, 1948, the English singer, songwriter, actor, and television personality rose to fame as the lead vocalist of the heavy metal band Black Sabbath. Due to his alcohol and drug problems, the singer was let go from the group in 1979, after which he went on to have a successful solo music career.

With a record of over 100 million sales from his years in the Black Sabbath and his solo work, it is needless to say that Ozzy Osbourne hit it big during his career. For his contributions to the music industry, Ozzy got inducted into the Rock and Roll Hall of Fame, UK Music Hall of Fame, and also the Hollywood Walk of Fame.

Apart from his successful music career, the 'Godfather of Heavy Metal' came to the silver screen as a reality TV star in the MTV reality TV show 'The Osbournes' in 2000 alongside his wife and manager Sharon Rachel Osbourne and two of his three children Kelly Osbourne and Jack Osbourne. He now co-stars with Kelly and Jack in the TV series 'Ozzy and Jack's World Detour,' the third season of which came out in June 2018.

Also See: Tokyo Vanity Net Worth - How Much Did She Make From Love & Hip Hop: Atlanta?

With such an immensely successful career, it's no news that Ozzy makes a fortune from his job. But how much precisely is Ozzy Osbourne's net worth?

According to Wealthy Gorilla, the estimated net worth of glorious metal star Ozzy Osbourne is $220 million, as of 2022.

The 'Godfather of Heavy Metal' Ozzy Osbourne's net worth is an estimated $220 million.
Source: YouTube

Considering the fact that Osbourne formed the band that went on to define the very essence of metal music for not just one but multiple generations, this net worth seems rather low. With 50 long years of music and reality TV career combined, one would expect the number to be much higher than this.

The number, of course, is only an estimated value, and the singer/reality star is yet to give out details to his actual wealth.

With very little formal education, 'The Prince of Darkness' did several menial jobs as a laborer, plumber, and apprentice toolmaker at the age of 15.

Ozzy Osbourne's career began as the lead singer after he teamed up with Geezer Butler to form his first band in 1967. But the band soon broke up, and the duo went on to collaborate with guitarist Tony Iommi and drummer Bill Ward to form another group, Earth. They renamed the band Black Sabbath in August 1969.

Between the years 1968 and 2014, the singer made more than $150 million from record sales of 100 million singles and albums. Before all the social media buzz began, there was only MTV, the primary source of entertainment.

Also See: BD Wong Net Worth - How Much Does He Make From Awkwafina Is Nora from Queens?

Realizing the potential, Ozzy jumped at the opportunity and took his brand alongside his family to cable TV in the form of a reality show titled 'The Osbournes.' While the beginning was slow, with Ozzy receiving only a $20,000 payout for each episode on the first season, the price quickly went up to almost $5 million per episode.

The house that Ozzy and his family resided in during the 1990s and early 2000s is located at 513 Doheny Drive, Beverly Hills CA 90210. This house was where MTV's reality TV show was filmed from 2002 to 2005. According to public records, the property was bought by Christina Aguilera in 2007 from Ozzy and Sharon Osbourne for $11.5 million.

The Georgian mansion, which once belonged to Ozzy Osbourne, was put up for sale at the beginning of 2018. The villa was situated in idyllic Amersham in the Buckinghamshire countryside. Sharon Osbourne wrote about this particular residence stating that she chose it due to its extreme distance from any public houses. Ozzy reportedly sold this house to an international buyer for £6.5 million in 2014.

The god of metal music gave up driving back in 2018 due to his alcoholic problems. Ozzy ( Ozzy's Health Problem) revealed in an interview with The Guardian that his wife, Sharon, kept on selling his Ferraris every time he bought one.

I am so pleased I gave up drinking. At one point, I never ever imagined going a day. I was a raging alcoholic. When I used to drink booze, I'd buy a Ferrari or whatever, and Sharon would always be getting rid of them so I didn't do anything stupid when I was drunk.

Ozzy, nevertheless, sports quite a fantastic collection of luxurious cars. He's often seen driving around in his black BMW 7 Series, which is currently valued at $96,950. Back in 2011, he was spotted behind the wheels of a black Ferrari 458 Italia that retailed at $225,000. This particular news was met with a lot of backlashes, given the history of Ozzy's drinking and substance addiction.

Dubbed 'The Prince of Darkness,' Osbourne also owns a black Bentley Continental GT that is valued at around $236,100 and a Mercedes S Class that starts at the asking price of $93,000. The only white car Ozzy owns is an Audi R8 that retails at around $176,000.

As the 71 years old near his golden years, Ozzy's fiances are getting dormant. Thus, it's highly unlikely that Sharon's husband's net worth rises anymore. Meanwhile, the rocker claims to be unfazed by the inevitable death. 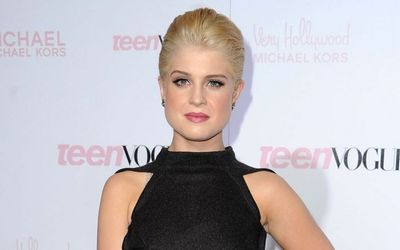 Kelly Osbourne Net Worth - How Rich is the Actress?

Jesse Sebastiani Net Worth — Complete Detail of His Earnings