Home / lifestyle / Who Was Clare Crawley Previously Engaged To? Her Complete Relationship Detail

Clare Crawley, the brand new Bachelorette, is all set for a new quest for love, but it's definitely not her first time seeking a partner. Crawley previously shared a romantic bond with Benoit-Beausejour-Savard with an engagement but that didn't end well. Let's take you close to all the details in between the love life of ABC's leading diva.

Clare Crawley, the 'Bachelorette' for season 16, wasn't a fan favorite, but a longtime acquisition into 'the Bachelor' shows. If it weren't for the ABC reality show, we would probably be unaware of the gem in the diva, who is a hair-stylist by profession.

Crawley announced herself as the new Bachelorette via the 'Good Morning America,' and her quest for love will now begin. However, it's not the first time she seeks love since she once used to be the fiancee of Benoit-Beausejour-Savard.

Clare Crawley Was Engaged to Benoit-Beausejour-Savard

In her attempt to seek love, the million earning diva, Clare Crawley, participated in the global version of 'The Bachelor Winter Games' - shortly after the Olympics. The fans were increasingly excited over the couple of Clare Crawley and Benoit-Beausejour-Savard from the start, and they weren't letting them down.

Clare Crawley fell in love with the Canadian actor, Savard, in 'The Bachelor: Winter Games', and it was everything that the showrunners wanted - drama!

You may also like: A Complete guide to Noah Centineo girlfriends and dating life.

The 38-year-old Crawley, met her ex-fiance while staying on the same lodge at the reality show, fell into a romantic affiliation and even made out. Everything was going smooth, but out of a sudden, like every other Hollywood movie, came to a villain in their romance, disguised as the Swiss Christian Rauch.

It was quite transparent about how Crawley developed a crush in the Swiss actor. That certainly made the Canadian insecure and inferior. Consequently, he expressed his heartbreaking feelings to the actress with a goodbye, leaving the show.

When it's love, there certainly is no boundaries. The two eventually met again off the show and started dating. One thing led to others, and it was Beausejour-Savard who went down on one knee to propose the American for marriage at 'After The Final Rose'.

Beausejour, interestingly took matters into his hand, designing the ring by himself. It was an oval diamond surrounded by tiny diamond linings over two carats, which cost about $50,000 to $100,000.

Also See: The Married Life of Tamela Mann. Who is her husband?

Crawley and Rauch's relationship, despite huge expectations and hype, turned sour just two months into their engagement. Thus, it was April 2018 when Crawley announced the couple's break-up through her Instagram handle.

"I'm sorry that this may not be what you want to hear, but it's our truth. Just know there are no negative feelings here, we are simply two people who believed in love, and were open enough to give it a chance."

2014 was a big year for the American hairdresser, Clare Crawley, since she was introduced into 'The Bachelor' as a contestant, set to be the missus of Juan Pablo Galavis.

So close, but yet so far! Clare Crawley ended up as a runner-up, second to Nikki Ferrell, and breaking her heart. The 'Bachelor', at that time. dumped the current Bachelorette very carelessly, which even made her lose respect for him. It was after that, fans started sympathizing with her and followed the American.

Clare Crawley finished as the runner-up in 'The Bachelor' to Nikki Ferrell.
Source: E! News

Sometimes things have to fall apart to make way for better things! And maybe, with 'The Bachelorette' now, Clare Crawley will finally find someone who actually deserves to be her husband. There's already suitors of a wide age-range for her.

Who is Kit Keenan From Bachelor Mom? Here's What You Should Know 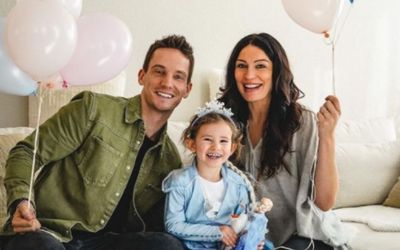 Who is Clare Crawley's Boyfriend in 2020?