The head of the National Institute of Allergy and Infectious Diseases, Anthony Fauci, thanked actor Brad Pitt for his rendition of the public health specialist on the new 'Saturday Night Live' remote show.

During an interview with Telemundo, Fauci said,

I think he did great, I mean I'm a big fan of Brad Pitt, and that’s the reason why when people ask me who I would like to play me I mention Brad Pitt.

At the show, Pitt, in character as Fauci, trolled misleading promises and false exaggerations made by President Donald Trump amid the pandemic, especially when Trump claimed there would be a COVID-19 vaccine pretty soon.

The doctor acknowledged Pitt for his remarks when the actor took his wig off following the immitation and praised the real Dr. Fauci and medical staff on the front line. Fauci said:

I think he showed that he is really a classy guy when at the end he took off his hair and thanked me and all of the health care workers. So, not only is he a really great actor but he is actually a classy person.

In another interview, however, Dr. Fauci was critical about one aspect of 'Fight Club' star's impersonation. "He got the raspiness of my voice right. He got the hand movements right. I think he's got to work a little on the Brooklyn accent."

CNN's Alisyn Camerota had asked Fauci earlier in the month who he would like to portray him on "Saturday Night Live," that's when Fauci said "Brad Pitt, of course."

You Might Like: Melissa Villaseñor Tattoos - Here's a Compilation of the Inks on the Body of the SNL's Star

When questioned to pick either Ben Stiller or Pitt, Fauci jokingly said he felt the A-list star would play him. At the beginning of SNL's second lockdown episode, a dazzling pitt emerged with pre-recorded portions from the actor's residence, making Fauci's wish come true.

Meanwhile, COVID-19, the illness triggered by the modern respiratory virus, has been reported among more than 3.1 million people worldwide, while the novel coronavirus pandemic has now killed over 227,000 people globally.

Owing to monitoring limitations, numerous unreported incidents, and allegations that certain governments are suppressing the extent of outbreaks in their countries, the real figures are believed to be even greater.

The United States, with more than 1 million confirmed cases and at least 60,966 deaths, has been the worst affected nation in the entire world. 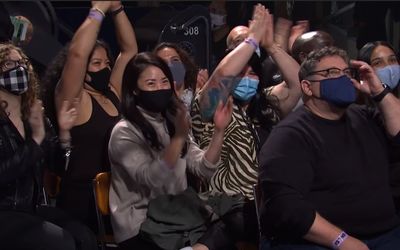