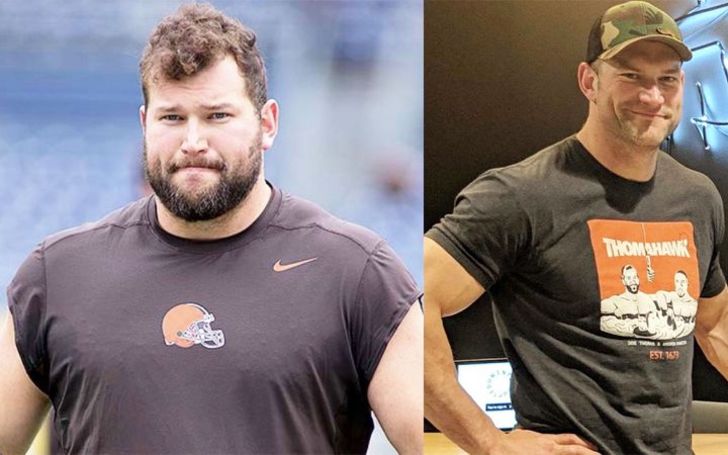 Joseph Hayden Thomas also, known as Joe Thomas, is a name famous for devoting his entire 11 seasons professional career to the Cleveland Browns of the National Football League. One of the best offensive linemen of all time, Thomas is now a retired football player.

If you follow the retired player on his social sites, then you must know that he shed a massive 50 pounds after his retirement. Joe looks nothing like he did before, and it's been an equally motivating thing to see the athlete's background on weight loss as well. So, today we take you to the complete journey of Joe Thomas's weight loss.

Even though Thomas proved to be a bright sport in the works he did, his weight was a problem since the beginning. Talent was what brought him to such heights, making him one of the best-left tackles in NFL history. He was especially noted for his durability, quickness, legendary pass blocking skills, and athleticism at the left tackle. But all these traits couldn't possibly push him too long by carrying a 325-pound playing weight. Perhaps this is why he retired in 2018.

Bodyweight had always been a pressing issue for the athlete since his early days. Starting from his campus days at Wisconsin, he weighed 250 pounds. His diet included a loaf of bread made into peanut butter jelly sandwiches, and he ate that every 30 minutes on top of three main meals a day.

Besides that, he indulged in 30-35 ounces of whole milk as well. He gained weight for his gameplay, which did prove to be a score in NFL but didn't do him good in maintaining his health. Joe used to stuff himself to maintain a heavyweight of 325 pounds, which made him sick, and he couldn't wait to retire and finally shed his weight.

Thomas made weight loss feel like handling an everyday task. Maybe it was due to the athleticism discipline in him. The main trick to weight loss, as said by our NFL player, is to stop eating breakfast and cut the carbs. He took the help of a great dietician, Katy, from the Browns, who introduced him to try an app called 'My Plate' that helps keep track of the nutrients.

Joe Thomas will be eligible for Hall of Fame in 2023.
Photo Source: Men's Health

After that, the decade-long professional player calculated his ideal ratio of protein, carbs, and fats. He also took the help of intermittent fasting as well as a keto diet to shed off the excess weight off himself. One of his main tips for a proper weight loss is to cut the breakfast as it holds more calories and causes inflammation. The diet thoroughly helped Thomas lose 25 pounds in the first month, and now he sticks to 1500 to 2000 calories per day.

That's not all, as the athlete still holds on to his workout regime. An additional sport is swimming that he's taken an interest in as he usually swims 30 to 45 laps a week for low impact cardio. Now, Joe is down to 255, and he's still trying to shed some more weight.

Hope you enjoyed the read, for more of these make sure to subscribe Idol Persona.